To till or not to till

For the last several years, many farmers have been adopting practices to improve the “soil health” of their fields. Often this includes no-till or reduced tillage, and the introduction of cover crops. While the basic soil health concept is relatively uniform, the way the practices are implemented is often very different from operation to operation.

Every farm and field is unique, and so is the management approach taken by each farmer. Systems that manage no-till combined with cover crops have been found to have the greatest benefit to overall soil health.

Unfortunately, the wet harvest last fall and continued saturated soil conditions this past spring in many parts of the state created a scenario that left many farmers scratching their heads: “To till or not to till…that is the question.” Last year’s harvest caused obvious compaction issues from equipment traffic. While long time no-till fields typically held up better than conventional tilled fields, the resulting damage to the soil was not kind in many cases.

“Heavy farm machinery can create subsoil compaction, even for no-till fields,” Hoorman said. “What farmers really want to know is how to heal the soil. Looking at the current situation for a lot the fields, it’s not good.”

According to research by Don Reicosky, a retired UDSA-ARS soil scientist, upwards of 80% of the benefits of continuous no-till can be lost with a single tillage pass. The degree of the benefits lost due to tillage depends on a number of factors, Hoorman said. Those factors include shallow vertical tillage or lightly tilling 2 to 4 inches deep to level sma 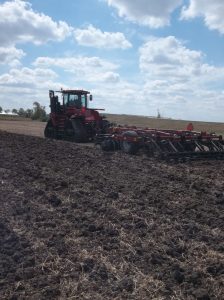 ll ruts and relieve shallow compaction, versus deep ripping a field 12 to 18 inches and then working the soil back down with several tillage passes to level it and prepare a seed bed.

Deep tillage such as subsoiling has been used to break-up subsoil compaction issues. The idea behind the deep tillage (running rippers at a foot to a foot and a half deep) is to loosen the subsoil, break compaction, and increase water infiltration and aeration.

“While some no-till fields never need to be subsoiled, for other no-till fields, deep tillage has increased yields, especially if equipment traffic occurred over a large portion of the field while soils were wet,” Hoorman said. “The problem with using tillage to break up compaction is that a new hardpan forms under the lowest point of the last tillage pass. Subsoiling just lowers the hardpan.”

When subsoiling is done, a break occurs in the soil profile. The tilled soil above the break is aerated and oxygen is introduced (aerobic). Below the new hardpan however, an anerobic condition exists (lack of oxygen). Tillage cannot eliminate the hardpan. 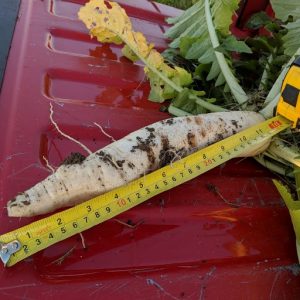 As the radish decays, it mellows the soil. Cover crops also enhance the environment needed to promote earthworm growth. The earthworms benefit from a soil that has sufficient organic matter, as well as oxygen and water movement. The decomposing plant residue provides organic matter as a food source to the worms.

“The more food they have, the bigger they get and the quicker they will reproduce,” Hoorman said.

The biological processes earthworms perform enhances the soil quality. As the organic matter is digested, the castings the earthworm releases as waste contain many nutrients useful to plants. In addition, as the earthworms tunnel, they aerate the soil. These tunnels allow air, water and nutrients to move deeper in the soil profile and, ultimately, move soil health in a positive direction.