Soybean Cyst Nematode (SCN) is hidden pest for soybean growers in Ohio and across the mid-west. Each year the yield impact from SCN costs soybean growers millions of dollars in lost revenue. The first step in tackling this pest is to know the SCN level in each field. Once those numbers are known, the best way to manage SCN in a field by planting varieties of soybeans with levels of SCN resistance.

SCN research is studying an integrated management approach. “Planting soybean varieties with a high SCN resistance level is a good management tool,” said Horacio Lopez-Nicora, Assistant Professor in Plant Pathology at The Ohio State University. “Research into integrated SCN management is investigating seed treatments. We are seeing SCN populations begin to increase even on our most powerful levels of genetic resistance, especially the most used ones. We can add a compliment to that genetic resistance with the use of seed treatments. This summer we will be conducting research to evaluate the different seed treatments to gain more knowledge on how effective these are in complimenting the resistance we already use.”

Integrated pest management can have several natural components. “Another integrated management strategy that we may be able to use to control SCN numbers is cover crops. The use of cover crops and how they can possibly mitigate the risk and damage that SCN can cause to a soybean crop is interesting to me,” said Lopez-Nicora. “I am anxious to do more research and look at data to see how cover crops can be used as a SCN management tool in addition to the other benefits that they provide.”

SCN can reproduce on host plants beyond soybeans. “Some weeds can be host crops for SCN,” said Lopez-Nicora. “A management question becomes how good a job we do controlling weeds in the field to not allow the SCN to increase its population. Weeds such as field penny-cress and henbit can support SCN and allow it to increase numbers. Weed control needs to be balanced with the potential of herbicide damage to the soybean crop. We will be conducting research to better understand the weed and herbicide impact and any potential interaction. We will also be studying the weed host range of SCN.” 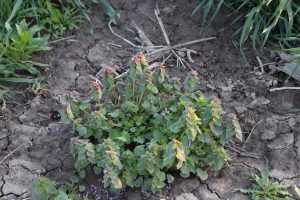 Crop rotation away from non-host crops such as corn or small grains is another management tool. “When a farmer rotates to a non-host crop, the SCN reduction is evident in the first and second year,” said Lopez-Nicora. “There is an aspect of SCN and the egg hatch biology that we still need to understand. We know that the SCN egg hatch is temperature dependent. We also know that soybean root exudates will stimulate the eggs to hatch. Non-host plants do not release the same root exudates as soybeans and other hosts. There is a third factor in SCN egg hatching biology and that is time. Some eggs will hatch in the first year if there is the correct temperature and root exudates in the soil, but for some SCN eggs those two elements can be present, but the eggs will still not hatch.  This is something we need to learn more about.”