Glyphosate is the active ingredient in Roundup which is the number one weed killer (herbicide) worldwide. About 90% of major USA crops (corn, soybeans) use glyphosate to kill weeds. China is the biggest manufacturer of glyphosate, but due to supply shortages and higher fuel prices; glyphosate is in short supply and prices are at least 3-4X higher than normal. This next year, farmers may have to have to adapt their weed control programs by using less glyphosate.

Glyphosate or Roundup was invented in 1950 but was not approved or used by Monsanto as a herbicide until 1974. Glyphosate use became dominant when soybeans and then corn were genetically modified in 1996 to resist glyphosate. Glyphosate is made from an amino acid called glycine, so it is readily absorbed by plants and breaks down quickly in the soil. Glyphosate kills most weeds fairly easily.

Weeds become resistant when repeated spray applications occur, allowing rare genes to be passed on to the plants that survive. Glyphosate is also known to chelate or tie up many micronutrients including iron, zinc, copper, and manganese. In addition to some glyphosate lawsuits related to human health, these factors may start to limit glyphosate use.

What are some alternatives to reducing glyphosate usage? One way is to plant more cover crops. Keeping plants growing year-round increases competition for water, nutrients, and light and may reduce weed seed production. Several cover crops like radish, cereal rye, and sorghum have natural chemicals in the leaves and stalks which reduce small weed seed germination. Some farmers are using crop rollers or crimpers to mechanically roll down and terminate cover crops after the corn and soybeans start to grow. This creates a natural weed barrier and a mulching affect that can reduce the need for glyphosate as a spring weed burndown.

Other alternatives include increasing seeding rates and planting crops in narrow rows. Close growing plants increases crop canopy closure and has been used to fight weeds for centuries. Rotary hoeing after crop germination is not as popular, but may reduce early germinating weed seeds fairly effectively. On soybeans, avoid using the rotary hoe until both soybean cotyledons and the first trifoliate of soybean leaves are visible, otherwise the stand may be diminished. Organic farmers sometimes use propane flame throwers between the rows and small robots may electrify growing weeds in the near future.

Another way to reduce weeds is to get a good soil test for both macro- and micronutrients. Most weeds flourish when one or more nutrient is missing. Fertilizing for deficient nutrients may decrease weed populations. As early soil colonizers, weeds generally grow in deficient soils until they restore the natural nutrient balance. Soils deficient in available calcium tend to be the most weed prone. If the soil pH is low or too acid, add lime (calcium carbonate) which also helps makes many micronutrients more plant available. If the pH is acceptable but available calcium is still low, add gypsum (calcium sulfate). An optimum soil pH for mineral soils is 6.3-7.0 with 5.3-5.8 pH needed for organic soils with a lime test index of 68-70 (both soil types). Adding a little calcium and/or humic compounds (fulvic and humic acid) to starter fertilizer increases seed germination, micro nutrient uptake and promotes faster plant growth, leading to faster canopy closure.

For farmers looking for alternative herbicides to glyphosate, there are several contac 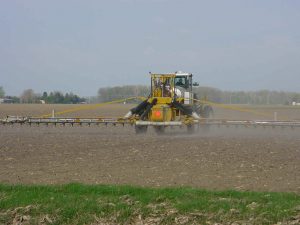 t herbicides sprayed directly on weed leaves. Gramoxone (Paraquat) is highly effective on small annuals. It’s very acidic, tough on equipment, and burns or desiccates everything, so be careful. It is often combined with atrazine, metribuzin, or 2-4D to control early growing broadleaf weeds. Glufosinate (used on Liberty link genetically modified crops) controls small emerging weeds and works best under warm or sunny spring conditions. Salflufenacil (Sharpen, Verdict, Optil) is most often applied with other herbicides at low rates, but suppresses many hard to control weeds (example marestail) and has no planting restrictions. Non-contact herbicides like 2-4D can be very effective against broadleaf weeds but planting restrictions (minimum of 7-14 days) can be an issue. Dicamba plus 2-4D esters together control many broad leaves and grasses, but they should be applied in early April if glyphosate or paraquat if not used. The supply of these alternative herbicides may also be an issue this year. Keeping weeds under control this year may be a challenge, but farmers have some several options to consider. on.