A shocking solution to weed control

The annual task of getting effective weed control is a challenge every farmer is familiar with. Each year millions of dollars are spent in the United States on herbicides to manage weed pressure in fields. As a boy, Seth Stutzman got tired of pulling and hoeing weeds on his family farm. The Stutzman family farms around 350 acres of organic corn, soybean and wheat near Plain City, Ohio. Those involved in organic crop production realize one of the greatest production challenges they face is getting consistent weed control, largely due to a much smaller number of approved chemical options for certified organic crops.

Two years ago, Stutzman found what he thought was a good solution to his hours of hand labor in the fields. 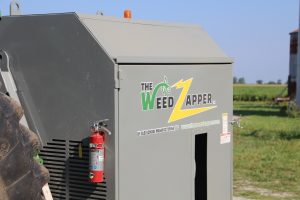 Stutzman purchased The Weed Zapper and began using it to clean up his fields, and those of neighboring farms. The Weed Zapper, manufactured by Old School Manufacturing in Sedalia, Missouri, is a tool that uses electricity to kill weeds by sending voltage down the weed stem, and rupturing the plant cells inside the weeds, which kills them instantly.

The concept of using electricity to kill the weeds first became popular in the late 1970’s and early 1980’s. Around that same time, herbicides were being developed and becoming more widely used. Herbicides were cheaper and readily adopted by farmers, so the concept of using electricity to kill weeds remained largely with the organic producers and specialty crop farms that did not have as many chemical options available. Recently the use of electricity has gained more momentum in the commodity crops as there has been an increase in the number of herbicide resistant weeds that need to be managed. “I started just using it on our own farm and doing some custom work for the neighbors who raised organic crops,” said Stutzman. “This year I have traveled in about a 100-mile radius from home doing custom work, and it has expanded beyond just organic farms to also some regular commodity grain farms that have herbicide resistant weed outbreaks that needed to get brought under control.”

There are four different models available, which vary in size by boom width and generator size.

“The generator size determines the horsepower requirements of the tractor,” said Stutzman. In 2018, Stutzman purchased the Annihilator 12R30, which is a 12 row, 30-foot-wide unit that has a 155,000-watt generator. “The manual says this model requires a 225 PTO HP tractor,” said Stutzman. “Last year I ran a John Deere 4850 that was turned up to 220 HP, and it was all it wanted to handle, especially in the higher moisture conditions that drew more power. This year I have a John Deere 8285R with 285 HP, and it works much better.”

The overall concept is relatively simple. Stutzman typically will start running his machine in early to mid-July once the beans have canopied and the weeds begin to emerge above the canopy. The boom height is run a couple inches above the soybean canopy, and only comes in contact with the weeds, sending a charge through the weed to kill it, but leaving the soybean crop unharmed. The Weed Zapper has two rolling coulters that ground the system. “It completes the circuit when the power from the boom brushes across the top of the weed, and then flows through it into the soil and is grounded,” said Stutzman. “The cell walls inside the weeds rupture when 15,000 volts of electricity flow through the plant, and it kills it down to the roots. A key is getting good contact with the weeds. The longer the boom is in contact, or the electricity flows, the more effective it is a killing the weed.”

Weather and soil moisture make a difference in the kill effectiveness and amount of power required. “I typically start sometime after the 4th of July once the beans have canopied, and weeds are emerging just above the beans so that I can get them with the boom. The last two years I have run until about Labor Day weekend,” said Stutzman. 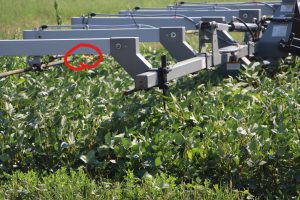 “The amount of moisture in the soil and in the plant makes a big difference in how much power is drawn down, and also how effective the weed kill is. The company says you can travel 2-3 miles per hour (MPH) in grass, and 3-5 MPH in broadleaf weeds, but the more contact the boom can make with the plant, and the higher the moisture content of the soil and in the plant to conduct the electricity, the more effective the kill will be. Early in the season I will run about 3.8 MPH, and get a good kill on ragweed. Later in the season I need to go slower, usually around 2.1-2.8 miles an hour, because both the plants and soil are dryer and the electricity is not conducted as well. In the early part of the season, you can really tell that it is drawing down on the generator and tractor sending voltage through the moist plants and into the soil.”

Like all weed control management strategies, Stutzman says that getting the weeds earlier rather than later is more effective. “I have not run into a weed that is electric resistant, like the ones that are herbicide resistant,” said Stutzman. “They are definitely easier to kill when they are younger, and have more moisture in the stems. Once they get hardened off and a little more “woody” in the stem, it is harder to get the electricity to flow the same and rupture the cells, killing the plant. Even if it does not completely kill the weed, it will often stop the flowering and seed production.”