Brazilian soybeans: not a disaster yet, but a serious failure is not impossible

I am writing between Christmas and New Year’s Day — that holiday week when we are not exactly sure about which day is which. Here in Brazil, many people take a break during this period of the year, and that is also my case. And, being in the Southern hemisphere, this is, of course, our summer break.

This spring/summer has been particularly hot and dry in southern Brazil, a region made up of three states (Rio Grande do Sul, Santa Catarina and Paraná) that account for about 30% of the country’s soybean production. After good rains in October, the region started to experience a spell of dryness and above-than-normal temperatures that have weighed on the 2021/22 soybean crop prospects since then.

The first regions to feel the pain imposed by the effects of another La Niña (a phenomenon that sometimes reinforces drier periods that normally hit the southern states during this time of the year) were western and southwestern Paraná, where soybeans are planted between mid-September and mid-October. Several fields that were blooming, setting and filling pods in November and December were hit by the drought.

In mid-December, Paraná’s Department of Agriculture (Deral) reduced its production estimate for the state (the number two in Brazil) from an initial potential of 22.1 million metric tons to 18.5 million — something similar to what Illinois produced in 2021. New cuts are likely in January for all producing regions in Paraná, since rains have been spotty in the second half of December and forecasts for the first 15 days of 2022 don’t look good, at least for now.

Areas planted later in the South

Further south, the situation is starting to become worrisome also in Santa Catarina and in Rio Grande do Sul. There, farmers plant later than in Paraná, and the soybean crop was still in the vegetative stage when dry conditions started to draw attention, in November. Since then, however, things have gotten worse and farmers were not even able to plant all the intended area in Rio Grande do Sul, Brazil’s number three soybean producer.

Nevertheless, the country as a whole is still likely to produce a record soybean crop (around 140 million metric tons, considering the present conditions) because other states have been favored by very good weather, especially in central and southeastern states. In top producer Mato Grosso, the 2021/22 production is likely to reach 39.5 million metric tons. That equals to Illinois, Iowa and Indiana’s output combined, just to give you an idea.

A few areas started to be harvested in Mato Grosso right after Christmas, but the combines will really speed up only from mid-January on, if it doesn’t rain too much. By the end of the month, about 8% to 10% of the soybean area will be already harvested in Brazil, according to a projection that AgRural sent to clients in late November, well above the 2% harvested in the same period a year ago, when the 2020/21 crop was behind schedule.

Is a disaster still possible?

Forecasting Brazil’s production is not exactly an easy task given that the country grows soybeans in several states, with very different crop calendars and diverse weather and soil conditions. Although many states have good prospects and a record crop is still possible at the moment I write this article, a serious crop failure is still possible, especially if the weather continues hot and dry in January in the South. 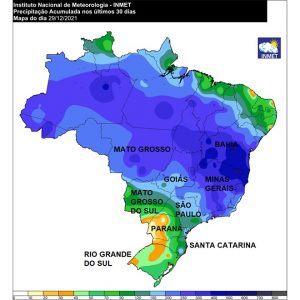 Another region that deserves some attention is that one known as “Matopiba,” in the North/Northeast of the country, where farmers plant from mid-October to December. Some areas of the four states that make up the region have received too much rain and the soybean crop might face some development issues, especially in Bahia. I will bring a clearer scenario in late January, when I will also write about Brazil’s corn crop. For now, I wish you all a very happy 2022!