Fulvic acid is a biological activator and energizer, getting critical nutrients into the plant through roots, stems, and leaves.  Humic acid is much denser and a storehouse for plant nutrients; especially nitrogen, sulfur, phosphorus, and calcium. Fulvic acid (FA) decomposes and microbially becomes humic acid (HA) over time. 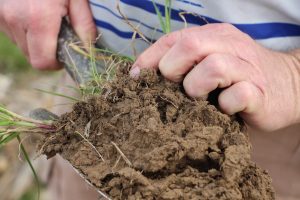 Drainage improves due to higher pore space and there is higher soil oxygen.  Soils are warmer due to its rich black color and it stores more water.  The HA buffers soil pH and decreases water runoff and soil erosion.  Due to both negative and positive charges, HA creates soil balance, storing and making many nutrients plant available.

Fulvic Acid (FA) and Humic Acid (HA) complement each other,  directly affecting plant DNA and RNA.  DNA holds a plant’s genetic code and has a negative charge that is activated by cations (positive charges) from FA.  The RNA is the messenger, carrying out genetic instructions stored on the plant DNA.  RNA has a positive charge and is impacted by anions (negative charges) from HA.  A little of these two humic compounds working together in a plant causes a cascade effect of intense “multiplier effects” for improved plant growth and yield.

One way that FA and HA increase plant growth and yield is by improving plant respiration.  Plants break down food for energy, just like humans, by using oxygen.  While plant leaves take in carbon dioxide and give off oxygen, plant roots take in oxygen for respiration and give off carbon dioxide.  Humic compounds improve soil structure so plants can get more oxygen so they growth faster and they yield more.  FA increases oxygen 38% in tomato plant roots while HA increased oxygen 24%.  Both FA and HA increase plant metabolism, helping improve photosynthesis, reducing drought stress and wilting, and increasing the uptake of nitrogen and many critical micronutrients.

The HA is the major storehouse for nitrogen (N).  Almost 90% of soil N is stored in humic compounds, many in the form of amino sugars.  Amino sugars are the backbone to both plant and microbial DNA and RNA. HA has been shown to increase nitrogen use efficiency 25-100% in plants.  Some of the HA acts like a growth hormone, sending signals to stimulate microbial and plant DNA and RNA into action.  Typically, the soil has 9X more HA than living organisms, but microbes, plants, and humans have HA flowing through their bodies.  On the positive side, soluble HA increases microbial growth by a factor of 100X. On the negative side; humic compounds are much higher in eroded sediments and are associated with Lake Erie harmful algae blooms. Improving soil health solves this problem!

If a farmer or gardener has good soil health, do they need humic compounds (FA & HA)?  If the soil is producing exceptional yields, it may not be beneficial.  Often something is lacking and yields are reduced or suppressed.  If a key nutrient is missing, humic compounds often contain the deficient element and they transform it into something the plant needs to improve growth and yield. Soils with poor soil health may get the biggest yield increases, but if a critical element is lacking, humic compounds can be the catalyst for much higher crop yields, even in healthy soils.

General application of humic compounds varies by soil type, plant species, and growing season.  Generally, soluble humic (FA & HA) compounds are the most efficient.  Applications can be made to seed, to the soil or leaves.  Transplants are often dipped in humic compounds to increase rooting.  In general, about a quart of fulvic acid (FA) might be combined with a gallon of humic acid (HA) along with a gallon of microbial concentrate. When using humic compounds, follow all label directions because humic compound concentrations vary and timing is critical. On corn, the first treatment can be made to fertilizer, over the row before emergence and/or when corn is 12 inches tall, or at silking.  On soybeans, at emergence and early flowering.  Humic compounds added to fertilizer may be a great way to optimize your fertilizer investment this year.