Each year during the months of May through July the National Oceanic and Atmospheric Association (NOAA) in conjunction with the National Center for Water Quality at Heidelberg University provides a seasonal projection of the Microcystis harmful algal blooms (HABs) in western Lake Erie on a weekly basis. This week the first projection for 2022 was released.

This spring has had average to slightly above average rainfall, with a few periods of heavy rains and high-water levels in 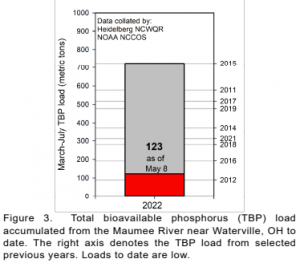 the Maumee River Watershed and parts of the Western Lake Erie Basin. Given the relatively wet fall and spring, not much fertilizer or manure had been applied in the region. While increased river flows were experienced recently, the phosphorus collected was relatively low.

With observations through May 8, we expect a bloom that is less severe than 2021 (<6). If precipitation for the rest of the spring matches the early season forecast of near or below average rainfall, a smaller bloom, similar to 2020 (<3), is likely. While July is not expected to be wet, it is still too far in the future for an accurate forecast. NOAA will update the early season projection each week with new information, and will issue a comprehensive seasonal forecast on June 30th.

Any bloom that does develop will change over time and move with the wind; we will provide information on the presence and location of the bloom throughout the summer. The total bioavailable phosphorus loads are projected based on Heidelberg University data, river forecasts from the National Weather Service Ohio River Forecast Center (through early July), and previous years to the end of July.