Soil Moisture and the Weather

There is an old saying that “drought begets drought”. Aaron Wilson, OSU Extension Climate Specialist explains that soil moisture can have an impact on both temperature and precipitation.

“When we get into weather patterns of dry weather and drought conditions, and it seems like the pattern continues, the level of soil moisture plays a role in that,” said Wilson. “The same applies when we get in a wet pattern, and it just keeps raining. The level of moisture in the soil can impact both the precipitation and temperature.”

“This past winter in Ohio was the 5th warmest on record since 1895 looking at the period of December through February. It was also the 22nd wettest,” said Wilson. “Relatively warm and wet describe how the spring of 2020 began as well. March was the 11th warmest, especially when you factor in overnight lows, and it was the 15th wettest on record statewide.”

Geographically, there are differences across the state. In the spring of 2019, Northwest and Western Ohio experienced continuous rainfall. “May of 2019 had anywhere from 20-26 days with some measurable amount of rain,” said Wilson. Things then began to change. By the end of the growing season, parts of western and southwest Ohio were in a moderate drought.

Different parts of the state experienced different spring planting conditions. “It was dry in April and early May in parts of Northwest Ohio. Looking specifically at Henry and Wood Counties, farmers were fortunate it was relatively cool,” said Wilson. “If they had experienced warmer temperatures, or if the same pattern had occurred in July, it may have led to drought in those areas.”

As the calendar turns to the summer and early fall, soil moisture levels and a summer pattern will most likely tell the story. “Dry soils and warm air masses usually lead to drought conditions,” said Wilson. “Increased soil moisture actually tends to keep daytime air temperatures lower. This June, Ohio is expecting to experience above average temperatures (mostly as it applies to overnight lows). 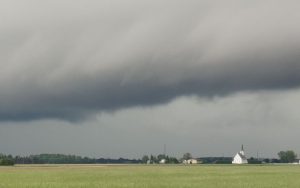 Favorable weather during the growing season is important for farmers. “Looking at the next three months, the signals are for slightly above average conditions,” said Wilson. “Precipitation is signaled to be greater than average, and we should have slightly warmer than average temperatures as well.”

Too much precipitation during fall harvest is often a concern. “There are indications of a La Nina pattern developing later in the fall and winter, described by cooler-than-average sea surface temperatures in the tropical Pacific. Late Fall could see a wetter than average pattern as we move late into the harvest season,” said Wilson. “Typically for Ohio, the El Nino or La Nina impact our winter weather patterns more than our summer patterns. El Nino patterns tend to be dryer winters for Ohio, and La Nina patterns tend to be wetter winters.”

Hurricanes have also impacted Ohio agriculture in recent past. Hurricanes can impact the late summer and early fall weather. “This year the United States is predicted to have a very active hurricane season,” said Wilson. The prediction is for more hurricanes including the stronger Category 3-5 storms than average.”