Raising Soybeans in a Drought

The 2019 growing season in was nearly a rain-out as 84,198 acres in Defiance County, Ohio elected for prevent plant.

2020 started much better with adequate rainfall in the late winter and early spring, followed by a timely dry down in time for planting. Since that time, however, the rainfall has not been as timely.

“We received 9/10 inch of rain on August 1st. Prior to that, we had a total of 1 ½ inches since we finished planting on May 15th,” said Mike Zeedyk, who farms along with his father Roger Jr. outside of Hicksville, Ohio. “The largest rainfall making up that 1 ½ inches over the 2 ½ month time period was .35 inch in one shower. The rest was just light sprinkles.” “We are raising a crop essentially on the morning dew,” joked Roger.

“We started planting both corn and soybeans around May 6th and finished about a week later. The ground conditions were really hard. There is just no tilth to the soil in some places of the fields after last year. There was one wet spot in a field where the water just finally dried up that we had to plant around this spring. It was sealed up so tight underneath, it could not get away,” said Zeedyk. “Despite all that, the crop looks relatively good considering what it has been through.”

“The crop got off to a good start, but has since struggled,” shared Roger Zeedyk. “Fortunately, we did not have to re-plant any of our soybeans, but there were some guys on the east side of the county that replanted a significant amount of their bean acres after a heavy rainfall this spring.”

The Zeedyk’s raise corn for grain and also silage for a local dairy, as well as soybeans. They also raise alfalfa. Roger started farming in 1971, and has been watching the impact of weather and different cultural practices on crop production for 50 years. Mike joined the operation full time 15 years ago. Prior to that, he worked on the farm part time while also working for a local ag retailer. Now a third generation, Mike’s 15-year-old son Brady, is also becoming more involved in the operation and quickly learning all the aspects of raising a quality crop in the clay soils of Defiance county.

According to the U.S. Drought Monitor, Defiance County is split with the eastern half being listed as a moderate drought, and the western half as abnormally dry. That designation is expected to change later this Thursday, as the new maps and designations are released. “Our Agriculture Extension Educator told us that according to the Palmer Drought Index, we are designated in the Severe Drought category,” said Roger Zeedyk. 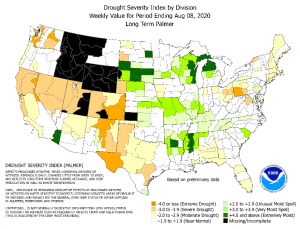 Raising a quality crop, and maintaining plant health is important to the Zeedyk’s. “We spayed fungicide and insecticide on ¾ of our soybeans, and around all the field edges. We noticed a few spider mites in some pockets with the dry weather,” said Mike Zeedyk. “We usually spray the best fields. “Never let a good field have a bad day” is our philosophy. We are always leaving check strips when we spray to see if it made a measurable difference.”

Zeedyk Farms has been a long time stop on the Ohio’s Country Journal and Ohio Ag Net Crop Tour, and the 2020 Virtual Crop Tour was no exception. The soybean field that was evaluated had a 3.3 bean that was planted on May 9th. Overall, the field looked very good. The beans were a little short, with a canopy height between 31-32 inches. The beans had nodes spaced about 2 inches apart with 3-4 pods clustered at each node, and 3 beans in nearly every pod. Because the field had been sprayed with both fungicide and insecticide, the disease and insect pressure were very low. Some timely rains will be necessary to help this field finish strong. The potential is there for a good yield if the weather cooperates.