The Ohio Sea Grant program is one of 34 State programs funded by NOAA to identify and research issues impacting their neighboring water bodies. Every state that touches the Atlantic or Pacific Ocean, the Gulf of Mexico or one of the Great Lakes has a Sea Grant Program. Sea Grant Programs are modeled after Land Grant Institutions, and take the research results and disseminate the information to stakeholders, decision makers, and those that can make a difference.

Chris Winslow is the Director of the Ohio Sea Grant, and also Director of Ohio State’s Stone Lab on South Bass Island in Lake Erie. While COVID-19 impacted the on-site education and outreach that Sea Grant conducts at Stone Lab, much of the research on the lake continued despite the pandemic. “We typically offer a lot of education and outreach programming at Stone Lab and everything at that location was shut down or went virtual,” said Winslow. “There were no face-to-face courses taught, no field trips for school groups, no outreach events for decision makers and stakeholders this year. We still conducted a lot of the research. There was a little slow-down in the early spring when some of the researchers were not able to get into their laboratories on their respective campuses, but data was collected this year, just not as much in the spring.”

One of the issues identified and being assessed in Lake Erie, by Ohio Sea Grant, is Harmful Algal Blooms (HABs). To address this issue, Ohio Sea Grant, in conjunction with the University of Toledo, co-manage the Ohio Department of Higher Education’s Harmful Algal Bloom Research Initiative. These funds are leveraged with NOAA Sea Grant support to study Like Erie stressors. Further, Ohio Sea Grant is also a part of a consortium known as the Lake Erie and Aquatic Research Network (LEARN), which has the goal of ensuring that all the academics and researchers at the partner institutions are talking together and sharing information and resources as appropriate to address the issues we have identified.

Understanding the dynamics of the HAB on Lake Erie is an evolving process, with more information gained each year. Each year a HAB forecast is issued, (by NOAA and Heidelberg’s National Center for Water Quality Research; hosted by Ohio Sea Grant) and then a final measurement is determined later in the summer. “It was a small bloom this year. NOAA’s early prediction was a 4-5 on a scale of 1-10,” said Winslow. “The final measurement was a severity index, or bloom size of a 3. That size hits the federally set objective and is where we would like to be from year to year.”

A number of factors contribute to the size of the bloom each year. “The bloom size is primarily driven by spring rains,” said Winslow. “We didn’t have a really wet spring in 2020. It is the nutrients that make it into Lake Erie from the first of March through the end of July that produce those blooms in the summer. 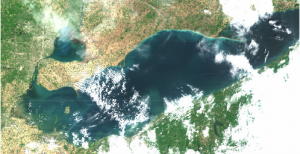 I also think that we are moving in the right direction in terms of our behaviors on the landscape both for agricultural lands as well as urban areas.”

While the size of the HAB typically gets most of the media attention, the toxicity of the bloom is also an important consideration. While these two factors are related, there is not always a direct correlation. “Usually, we anticipate that big blooms will be toxic, but it is not always the case,” said Winslow. “What we have discovered lately is that light levels impact the toxicity of the bloom, and also nitrogen levels. Nitrogen impacts the size of the bloom, but you also need nitrogen to make toxic blooms. The actual microcystins, which is the compound that is toxic, has a lot of nitrogen in it. The HAB is not just a phosphorus management issue, it is both a phosphorus and nitrogen management issue.” A number of the best management practices being promoted, such as cover crops, and variable rate fertilizer application to better manage and capture the phosphorus and nitrogen used in agriculture, are important steps affecting the HAB.

Current research in ongoing on to find improved ways of maximizing yield while minimizing negative impacts to water quality through edge of field studies. This HAB research is taking place both on land, and also in the lake. “We are trying to determine when a bloom has a greater probability that it will be more toxic,” said Winslow. “We have learned about the genetics of the blooms, and the unique genetics that cause some to produce toxins. We now know that there are 10 genes needed to produce the toxin. This allows us to sample the blooms and run the genetics to determine the likelihood that it will produce toxins in that year.”

Winslow refers to nutrient sources impacting the HAB in Lake Erie as coming from three “buckets”. The first bucket contains nutrients entering the lake as runoff from the land. Effective water management practices can help manage the nutrients going into the lake from this bucket. “Any way we can hold the water on the land or slow the water from entering the lake will help reduce the algal bloom,” said Winslow. Water control structures, wetlands, and filter strips all aid in this process.

The second bucket contains “current use fertilizer” and nutrients which are applied in the spring or fall to be used by the current crop, or in the following season. These are ideally managed by implementation of various best management practices, such as soil testing and variable rate fertilizer application.

The third bucket contains the legacy phosphorus and other nutrients already present.

Other Ohio Sea Grant funded research, applied to agriculture, is being conducted across the state. “At Ohio State, Dr. Harold Keener is studying best manure storage practices. His research has shown that if a producer lets manure set in a lagoon for more than 90 days, the sediments and a lot of the phosphorus will settle out and the water on the surface will contain less phosphorus when it is applied,” said Winslow. “Dr. Keener has also done research looking at the phosphorus content of manure and ways to adjust feed rations to change the phosphorus content of the manure.”

Ohio Sea Grant research for agriculture is conducted at institutions beyond Ohio State. “Research is being conducted by Dr. Bob Midden at Bowling Green State University looking at polymers being added to livestock manure to bind the phosphorus temporarily, but not permanently,” said Winslow. “These polymers could be used on the manure solids as they are being dewatered, and then applied to the fields to hold the phosphorus until it is needed by the growing crop.”

Looking ahead to 2021, a lot of the work by the Ohio Sea Grant program will continue. Much of the current research will continue, but under different situations. No two fields are alike, and no two years are alike. Getting a better understanding of how different best management production practices react under different environmental situations will help in making recommendations and decisions.

“We are also working hard to look at streams themselves,” said Winslow. “For the last 5-6 years, we have looked at rivers as just pipes that take the water and nutrients and dump them into the lake. Now we are looking at the potential of the rivers drawing down the nutrients and holding them as they settle out; and then the cases where the rivers are contributing nutrients themselves. We are funding projects to look at a river’s net reduction of nutrients, and net additions. Early research indicates that they are drawing down more nutrients than they are adding, but there is still a lot of research to be done in that space.”