Where are we going with U.S. and Global Trade?

The COVID-19 pandemic has certainly had an impact on international trade. “Global trade was forecast to decline by 9.2% in 2020, but then rise 7.2% in 2021 according to the World Trade Organization,” said Sheldon. “Those forecasts were originally made in late October and November of 2020. Forecast estimates initially looked much worse as their April forecast was for a decline of anywhere from 13-32%.” There is still considerable uncertainty about the trajectory of trade for 2021 in light of the resurgence of COVID-19 at the end of 2020, as well as the discovery of the mutations of COVID-19 in Europe and now the United States.

The federal government’s understanding of, and response to the pandemic and international trade issues is critical. “It is important to understand the impact of the pandemic, and given the forecasts that both macroeconomic policy, be it fiscal policy or monetary policy; along with what we do or don’t do with trade policy, is quite critical to mitigate the impact of the pandemic on trade and GDP, and maybe even stimulating the economy as we come out of the pandemic,” said Sheldon. This assumes the vaccine is effective and gets widely used, not only in the U.S., but also around the world.

Data from the World Trade Organization (WTO) enhances the situational analysis. “Looking at international trade data going back to the year 2000; if the U.S. had continued on the trend for global trade prior to the financial crisis of 2008 and 2009, that global trade would have been much higher than it is today,” said Sheldon. “After the financial crisis, international trade resumed, but at a much slower pace than if we would have stayed on the trend that was set prior. The second significant disruption to international trade came with the pandemic in the spring of 2019, however it actually began to start to slow in late 2018 as global GDP slowed down. There was a close association between world trade and world industrial production looking at the third quarter of 2019.” 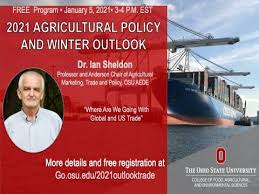 Looking to the future of global trade, there are several positives and negatives to weigh-out. “The resurgence of COVID-19 requiring lockdowns could reduce global GDP growth by 2-3% in 2021,” said Sheldon. “There is also uncertainty in the outlook for fiscal policy and high rates of unemployment in many countries, which could reduce trade by 4% in 2021. On the other hand, with the deployment of the approved vaccines, that could boost confidence and raise global GDP growth by 1-2%, and global trade by 3% in 2021. The trade could also be affected by growth in technology sectors, and the leveraging of information technology to allow people to work and conduct business remotely.”

Agricultural trade has actually proven to be quite resilient globally. Exports started to rise by the end of May,” said Sheldon. “Global agricultural trade grew by 2% up through early December 2020. One reason is because of the essential nature of food, another is that bulk marine shipments of commodities such as cereal grains and oil seeds were not subject to major disruptions.”

The pandemic has impacted each commodity differently. “There was an increased demand for staples, processed fruits, and vegetables, largely from panic buying, and people eating at home more,” said Sheldon. “There were also reduced exports of fresh produce, dairy and meat, as well as a decline in food service demand, as well as tourism.”

An increase in food insecurity is a concern worldwide as a result of the pandemic. “By the end of 2020, an estimated 270 million people are expected to be food insecure,” said Sheldon. “This is an 82% increase from pre-pandemic levels. To help provide relief, it is critical to keep trade flows open and supply chains operational.”

A video of Dr. Sheldon’s presentation can be viewed at https://aede.osu.edu/research/agricultural-policy-and-outlook-conferences/county-meetings