What is vertical tillage?

The one thing that most manufacturers will agree on, however, is that vertical tillage is not a disc. A disc is commonly defined as an implement that has 2 gangs of concave blades, typically set at an 18-degree angle which come in contact 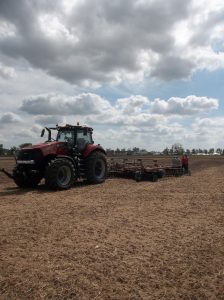 Since the mid-1990s the concept of vertical tillage has gained popularity. As a concept, vertical tillage primarily involves both eliminating any horizontal density layers that exist in the soil profile, and not creating new ones. Additional functions have been tied to the definition of vertical tillage more recently which include: the sizing and management of crop residue; leveling the soil and filling in shallow ruts; and reducing soil nutrient stratification.

“The definition of vertical tillage is unique to each individual. There are a lot of variations,” said Doug Martin, general manager of Paul Martin & Sons. “A lot of it goes back to what the guy wants to accomplish. We had one farmer who used a tool that sized all his corn residue but the process did not pin it to the soil, and after the first big wind storm, it all blew out of his field and into his neighbor’s farm pond. Obviously, that didn’t work out too well.”

“Farmers are very experimental and willing to try different things until they find what works. A farmer needs to decide what their objective is. There may be multiple objectives at the same time.”

If residue management is the goal, a compact disk may be the best tool for the job. A compact disc, also known as a high-speed disc because of the higher ground speed which they are pulled at, have a series of concave blades that can be run at 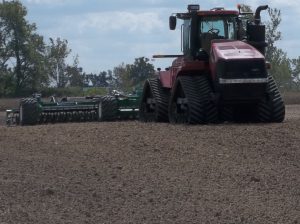 varying angles. They may also have a series of baskets or a harrow to help level the soil. While these tools do a good job sizing and pinning residue to the soil, they typically do not fit the definition by most of vertical tillage because they move soil from side to side.

“A Horsch Joker when set aggressively can bury 60% to 70% of the residue,” Martin said. “A Landol VT for can be used as a primary or secondary tillage tool. It can be set at a 15-degree angle to bury residue, or taken back to a 5-degree angle just to level and warm up the soil.” These would not fit the original definition of vertical tillage, but they do meet the objective of some farmers today in this arena.

As the vertical tillage movement gained momentum, some manufacturers tried to re-purpose existing product lines to fit what farmers were looking for while still utilizing existing manufacturing processes. Some of these are conventional tillage machines that were converted to better manage residue. Others started with completely new designs based on specific criteria. High speed, straight blade coulter machines continue to gain popularity. Today many farmers think of these wide tools that are run at shallow depths and high speeds as vertical tillage.

Research from Purdue University has shown limits to shallow tillage.

Shallow vertical tillage is also not effective for weed control in many of the hard to manage species, such as marestail. “Shallow tillage will annoy it, but not control it,” said Bryan Young, Purdue University Extension Weed Specialist.

In general, vertical tillage is a system approach rather than a specific piece of equipment. That system can have many objectives, such as breaking up compaction layers at varying depths, leveling out areas of the field from tire tracks or water erosion, managing and sizing residue, or to improve rainfall penetration by breaking up a surface crust. It is also important to remember that some soil conditions or crop rotations favor one design over another.

Regardless of the specific objective or objectives of the farmer, chances are good that with over 24 manufacturing companies operating in this arena, not to mention the many farmers who have built their own vertical tillage solutions, there is a machine out there to do the job.