What is a Drought?

When the National Drought Mitigation Center constructed the latest U.S. Drought Monitor on March 16th, much of the northern half of Ohio was considered D0 “Abnormally Dry”, with a portion of extreme Northwest Ohio being classified as a D1 “Moderate Drought”. The U.S. Drought Monitor is produced through a partnership between the National Drought Mitigation Center at the University of Nebraska-Lincoln, the United States Department of Agriculture, and the National Oceanic and Atmospheric Administration. The Droug 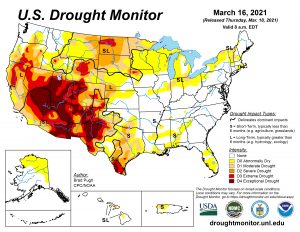 ht Monitor summary map identifies general areas of drought and labels them by intensity. D1 is the least intense level and D4 the most intense. Drought is defined as a moisture deficit bad enough to have social, environmental or economic effects. D0 areas are not in drought, but are experiencing abnormally dry conditions that could turn into drought or are recovering from drought but are not yet back to normal.

When trying to better understand drought, there are a number of factors to must be considered. Precipitation and drought are not the same thing. “Precipitation is not subjective, it is objective. Drought is very subjective,” said Dr. Aaron Wilson, Research Scientist, Byrd Polar and Climate Research Center. “The US Drought Monitor takes in a “convergence of evidence”. That means it factors in a lot of different pieces of evidence based on the time of the year, such as evaporation, precipitation, and weighs it objectively and subjectively to see how they line-up.”

There are a number of different types of drought. “There is always the question: If you don’t see the impacts of drought, is there actually a drought?” said Wilson. “There are a lot of ways to define a drought. It is very important from a monitoring standpoint to understand what the impacts are. Agriculture is on the front line of those impacts, and we see drought impacts in agriculture pretty much before they are seen anywhere else.  There is no clear line in terms of the precipitation amount. It is just a matter of how the evidence is coming together based on the time of the year and what the water usage is.”

Looking ahead to the end of March and into the spring, there are a number of indicators to consider. Wilson expects an elevated probability of precipitation, and also above average temperatures. “One thing that has changed is that we are now in what is considered E.C. That is equal chances of seeing above, below, or average precipitation,” said Wilson. “While that may not seem important, it tells that there are not any strong signals that say it will be wetter or dryer than average.” 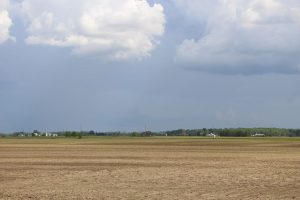 Looking ahead to the long-range outlook for April, May and June, the indicators are for wetter than average and warmer than average. “There is a pretty elevated probability of wetter than average conditions for April, May and June. There will definitely be windows of opportunity to get the crops planted this spring,” said Wilson. “I am cautions because of our current status. If we head into June with these dry soil moisture levels, then there is the potential for the drought that is to the west to expand into Ohio this summer.”