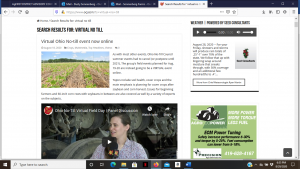 Video’s of the event can be viewed at: https://www.ocj.com/2020/08/virtual-ohio-no-till-event-now-online/

One of the challenges that farmers face, when incorporating cover crops in their operation, is timely planting to achieve successful cover crop establishment. It has been said that a farmer needs to be as serious about planting their cover crops as they are about their cash crops if they expect a good cover crop stand. When wheat is in the rotation, timely planting in the late summer is typically not a problem. In the fall when planting after corn or soybean harvest, it is a different story. While there is an agronomic value to having a three-crop rotation, many farmers have taken wheat out of the rotation due to lower profitability. A strict corn-soybean rotation limits some of the cover crop options.

Cody Beacom of Bird Seeds believes that planting cereal rye after corn and ahead of soybeans is a simple system for farmers to start with. Moving to a mixture of cover crops is the next step. “Ahead of corn a mix that contains legumes is a great program,” said Beacom. “A mix that contains a clover, some winter peas, and hairy vetch, maybe some rape seed and some rye would work well.” Successful establishment of mixes is somewhat dependent on planting date for the most susceptible species in the mix. A straight rye cover crop can be planted much later, and still see benefits, even if it really does not emerge until spring. “A farmer can go into early December and plant rye following corn,” said Beacom. “If a farmer plans to plant that late, and still wants to plant beans early in the spring, they should really think twice about what they want to accomplish with the cover crop. Most likely they will not get the desired benefit from the cover crop in the spring if they plant that late, and then are in early with the beans.”

Some farmers will adjust the maturity of their corn hybrids or soybean varieties to allow for an earlier harvest in order to successfully establish a cover crop in the fall. “We typically plant shorter season corn hybrids and soybean varieties because we do not have on farm storage, and we want to have it dry at harvest so we can haul it to town,” said Martha Winters of Deer Run Farms “That allows us to get rye established after both corn and soybeans. We have planted as late as the first of November. We are usually done with harvest by the middle of October, so we can plant and get a stand established in the fall. We like to plant in the early in the spring, so we typically do not get a lot of spring growth.”

Being able to plant a shorter season hybrid or variety and maintain the yield of the more full season hybrid or variety depends on several factors. “You have to have a lot of plant health in Ohio to get by and get a comparable yield with the early season varieties as you would in the full season varieties” said Fred Yoder. “With no-till and cover crops, a shorter season variety will allow you to wait a little longer in the spring for the ground to get fit for planting, and still potentially harvest earlier in the fall to be able to establish a cover crop.”

Better weed control is a benefit several farmers have experienced after implementing cover crops on their farms. “With a good stand of rye, we have basically solved our issue of marestail and dandelion,” said Yoder. “We crowd the weeds out with the cover crops. We also save in our chemical costs. We will use a burndown and add a little grass herbicide, and then come back with a post if needed, so we actually use less chemicals. There is a multiple amount of value with cover crops that goes beyond just soil health, and that all needs factored into the equation.  Soil health, weed control, it is a systems approach.”

Every year, every farm, and every field is unique. “There have been years depending on the field and what the cover crop stand was that I could skip my burndown in the spring, or maybe was able to skip the post application because of the cover crops controlling the weeds. We have started to use a roller crimper, having that mat on the ground has worked well. It is a system,” said Nathan Brown. “I tell guys to pick what they want to achieve with cover crops, and focus on that, then you will see the other benefits as them come.”

Establishment is a key to cover crop success. “The optimum way to establish a cover crop is to somehow get it in the ground,” said Beacom. “Not everyone has the equipment or time in the fall to accomplish that, so others like to fly it on with a plane. Some also like to use an airplane because the cover crop can be seeded earlier, even before harvest, and also because it is something, they don’t need to worry about doing, it is just done.” Winters agreed with Beacom, and said that a lot of the success of seeding with a plane depends on the year. “We typically fly cover crops on our wettest acres, and recently we have started using a Turbo-Till to lightly incorporate the seed, and can cover a lot of ground quickly.”

“For cover crops to work for a farmer, it is going to need to be nimble and easy to use,” said Yoder. “Everyone needs to find what works for their operation. We are getting plates to put in our 40’ planter and plan to use it to plant cover crops in 15” rows and follow the combine through the field to get them planted in a timely fashion. We have a Valmar air seeder on a Kuhn Krause Excelerator, and cover a lot of acres with that as well. This is a constant experiment out here, and we are finding things we can always do better.”

Brown agreed with Yoder about the experiment and always learning. “I tell guys to start with what they already have in the barn,” said Brown. “Everybody has something that can put a seed in the ground. Start with what you have, and once you get established and plan to continue with it long term, then work into what you need to really do the job you want.”