Transitioning requires flexibility and having the right tools for the job.

In a twist of fate, the transition to organics began in 2019 for Shane Meyer of Countryside Land Management in Wood County. It was the year that found over 50% of the acres in Wood County electing for “Prevent Plant” status. “We were a traditional corn and soybean operation using strip-till for the corn,” said Meyer. “I had been talking to a neighbor that has been an organic grower for a number of years about what it took to transition from a conventional farm, and the prevent plant year gave us a great opportunity.”

Shane Meyer grew up on their family farm in Henry County and worked in his father’s trucking business. “I got more involved in the farming operation when I bought my first farm in 2005,” said Meyer. “In 2007 we purchased an RTK guidance system and a 6 row Orthman strip-till machine. The strip-till is the perfect happy medium (between conventional tillage and no-till). I began to strip-till 150 acres of our ground, and another 400 to 500 acres of custom strip-till for neighbors.” 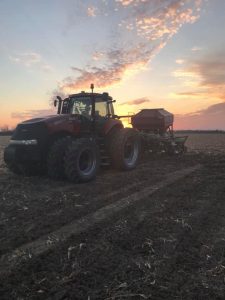 In 2014 the customers told me they wanted to variable rate two products, and so I upgraded to a twin bin machine that can variable rate apply two single products or blends.”

On average, Meyer annually custom strip-tills 1500 acres, and if weather permits, will often do another 500 acres.

Cover crops entered the picture for Meyer when he added a broadcast seeder onto his strip-till machine in 2014. “I am really learning a lot in this area,” said Meyer. “I have worked with cover crops, in particular cereal rye for about 7 years.  We will broadcast about a bushel of cereal rye in front of the strip-till machine, and then adjust the row cleaners to throw a little more soil to clean the rye out of the strips, and to cover some of the seed in the middle of the rows.”

As Meyer transitions to organic production, he is attempting incorporate the benefits of using cover crops. “There is so much to learn when it comes to cover crops,” said Meyer. “I am just beginning to learn more about cover crop blends. Finding the right cover crop blend is what I am trying to figure out to use on the fields we are transitioning to organic production.”  Meyer turned to Jay Brandt of Walnut Creek Seeds for advice and now is also a seed dealer for them.

The thought of pressure from weeds and insects, as well as re-introducing tillage into the operation have been hurdles Meyer has had to overcome in his transition to organic farming. “When I first was considering organic farming, someone told me that if you can’t stand the sight of weeds, then don’t go organic,” said Meyer. 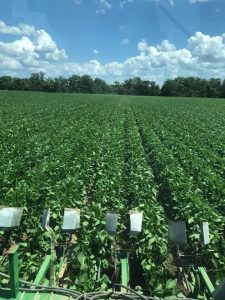 Having the right tool for the job is a key regardless of the application. “When I am not farming, I am working on trucks,” said Meyer. “I have a toolbox full of tools that I do not use on every job every day, but when I need them for a particular job, then I need to have them or the job doesn’t get done. Weed control in organic farming is a lot like that. You may have several styles of cultivators or tillage tools that all basically accomplish the same task, but each do it in a slightly different way. Depending on what size the beans are, and where the weeds are at determines which tool I need for the job.”

Meyer’s latest tool purchase is a Weed Zapper. “The concept of a weed zapper is to use a high volt of electricity to control weed escapes that grow above the soybean canopy,” said Meyer. “Even if the weed has gone to seed, research shows that when a weed comes in contact with the electricity, it will kill the weed, and also greatly reduce the germination of any weed seeds that were produced by that plant.”

Meyer knows that there is still a lot to learn, and there are more tools that are available for organic weed control that he has not seen yet. “Sometimes you think a particular tool will do the job, but you don’t know until you try,” said Meyer. “Having the right tool for the job, whether it is strip-till with variable rate fertilizer, or the right cover crop blend, or even a weed zapper…they are all tools in the toolbox waiting for the right job.”