By Dusty Sonnenberg, CCA, Ohio Field Leader: a project of the Ohio Soybean Council and soybean checkoff. Adapted from the SCN Coalition Newsletter.

The SCN Coalition, funded by soybean checkoff dollars, is made up of a diverse group of University researchers, Extension specialists and ag company representatives who are concerned about the evolving threat from soybean cyst nematode. When the SCN Coalition originally formed in 1997, the theme was for farmers to “Take the Test. Beat the Pest.”

Now the SCN Coalition has a slightly revised mission. Since SCN is becoming resistant to the PI 88788 source of resistance (used in more than 90% of resistant varieties), the coalition is encouraging growers to “Know Your Number” and actively manage SCN. The goal is to decrease SCN populations and increase yield potential. To accomplish this goal, they have produced a series of videos to inform growers of the importance and best management practices. (Click on the hyperlinks to view each video.) 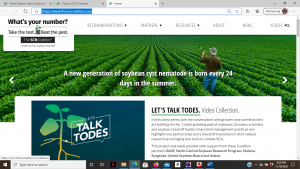 The SCN Coalition encourages soybean growers to know which fields have soybean cyst nematode (SCN) and at what population densities. Management of SCN starts with a soil test. Soybean Cyst Nematode is the most damaging soybean pathogen currently. Coalition experts want soybean growers to consider the impacts of leaving SCN unmanaged on their bottom lines because SCN is the number one yield dragging pathogen of the soybean crop in North America.

To view all the video’s in the SCN Coalition series, visit https://www.thescncoalition.com/lets-talk-todes