Cold temperatures, pounding rains, and soil crusting have led to the need for crops being replanted in some areas. With parts of Ohio receiving rain in excess of 4 to 6 inches in a matter of 24 to 48 hours just a few weeks ago, the impact of that flooding and soil crusting has reduced seeding emergence in some fields. Those challenging soil conditions, coupled with two nights of freezing temperatures just prior to the rain, seems to have led to less vigor of the newly germinated seed, reducing the overall plant stand. 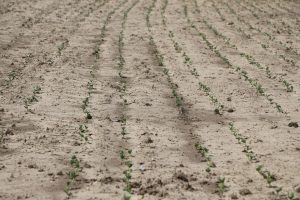 Farmers are currently assessing emergence and stand establishment in both corn and soybeans.

Given the nature of the soybean plant, it can adapt and utilize additional space to increase its prolificacy.

“Even soybean varieties labeled as ‘in-line’ will produce more branches if the plant population is low,” Lindsey said. “For soybean planted in May, I wouldn’t think a re-plant would be needed if plant stand was greater than 80,000. With lower plant populations, the soybean plants will be shorter and pods will be lower to the ground. So, farmers will need to adjust their combine to harvest lower on the plant.”

Much of the soybean research looking at yield has evaluated planting dates and seeding rates.

“I think producers also need to think about planting date,” Lindsey said. “The main factor that influences soybean yield (across the Midwest) is planting date.”

Factors behind the importance of planting date are based on the stage of development the plant reaches over time and what the weather conditions are at those stages.

“If water isn’t limiting during pod development, the yield reduction can be as much as 0.5 bushels per acre per day reduction in yield for each day planted after May 1,” Lindsey said. “Replanting will cause some yield loss because planting will be later.”

When it comes to final yields, research is showing that the soybean plant adapts to the final population to optimize yield.

“We have found that the soybean plant is very adaptive. We have research data from 2018 when we had a somewhat normal year that showed the majority of soybeans in Ohio yielded the same regardless if the seeding rate was 80,000 or 200,000,” said Sam Custer, assistant director for Agriculture and Natural Resources, and OSU Extension Educator in Darke County. “We are fairly confident to say that in a normal planting season, the lower planting populations will yield the same as the higher planting populations.”

A production goal every year is to get soybean canopy closure as early as possible to conserve soil moisture and reduce weed pressure.

Given the current market conditions, economics should also be a factor.