The phenomena of Soybean Cyst Nematodes (SCN) developing resistance to SCN resistant varieties is similar to the herbicide resistance problem. After more than 20 years of farmers using the same source of soybean cyst nematode resistance, nature is finding a way around it. Natural selection occurs as the nematodes continue to feed, reproduce and adapt.

Soybean growers still need to know their numbers. This means understanding the level of SCN pressure in a field measured by the number of SCN eggs present in a soil sample, and typically represented in terms of number of eggs per 100 cc of soil. Dr. Lopez-Nicora is still offering free sample processing for up to two samples from farms in Ohio so they can stay on top of monitoring the situation in their fields. This project is funded in part by the Ohio Soybean Council and The SCN Coalition, growers may submit up to two soil samples to my lab, and we will test them for SCN free of charge. We suggest collecting one composite sample from a low- and another from a high-yielding area, as this will allow us to determine whether SCN is the reason for low yield. Download and complete this Soil Sample Submission Form and mail your samples to: 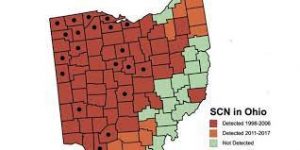 For more information on SCN sampling and management visit our factsheet here.

More soybean growers are actively managing SCN. The SCN Coalition (also funded by the soybean checkoff) conducted a survey of soybean growers in 17 states in 2015 to find out if they knew about weakening SCN resistance and strategies to actively manage SCN. The survey was repeated in 2020 and revealed the projected economic impact of the Coalition is staggering: 6% to 18% more soybean growers are actively managing SCN than in 2015. That’s tens of thousands of growers, millions of acres and hundreds of millions of dollars. The survey showed growers rotating sources of genetic SCN resistance at 49% in 2020, up 10% from 2015. It also showed growers planting SCN resistant soybean varieties increased to 66% in 2020 up from 59% in 2015. Growers identifying Peking as a source of resistance was at 25% in 2020, up from 15% in 2015. This awareness of alternative sources of resistance is important when evaluating varieties in the attempt to break the cycle.

Along with rotating resistant varieties, farmers are encouraged to rotate to non-host crops, and consider using a nematode-protectant seed treatment.