Late summer and early fall (August 1-Mid-September) is a great time to sow cover crops.  Methods include broadcasting with an airplane, helicopter, high boy applicator, various types of spreaders OR seed incorporation with light tillage or a drill.  Broadcast seeding rates need to be 10-20% higher and are highly dependent upon adequate moisture at planting.  Incorporating or drilling the seed means sowing the cover crops after grain is harvested.  Successful cover crop stands depends upon getting seed planted correctly.

Using an airplane or even a helicopter is fast and economical.  Airplanes have to avoid trees, telephone and power lines; so stands may be variable on the ends.  Helicopters can hover but the whirling blades sometimes variably scatter the seed. In both methods, cover crop seed my end up in corn whorls or on neighboring fields.  Broadcast seed can be eaten by voles, slugs, or earthworms which drag the seed down their burrows.  Avoid broadcasting seed if the soil is excessively dry or hard because either the seed will not germinate, or it may germinate with a light rain, then perish.  Small seeded cover crops are generally more successful, since large seeded ones may split, and fail to grow. Broadcasting, can be successful, but fast-growing small seeds that tolerate shading and require little moisture to germinate work best.

High boy applicators are becoming more popular, ranging from 60-120 feet wide.  High boys can cruise between corn rows or soybeans and with drop down nozzles, can place the seed below the crop canopy. Corn losses on the end rows average about 1-2 bushel per acre.  Broadcast seed on corn when there is 50% sunlight penetration.   High boy damage in soybeans varies depending upon whether the soybeans were drilled, or placed in 15 to 30-inch rows.  In soybeans, a minimum of 25% yellow leaves is recommended before sowing.  Planting cover crops too early may result in green residue and moisture problems at harvest if cover crop grow fast.   Getting good cover crop stands in soybeans is more difficult than corn, probably due to inadequate sunlight.  Soybeans planted with wider spacings tend to have more successful cover crop stands.

Some farmers are experimenting with applying cover crop seed with the combine.  Seeding boxes have been mounted under the header, in the rear before the chopper, and sometimes even through the combine and spread with the chaff.  The main disadvantage is that the seed has to be sown when the grain crop is harvested, so the planting date is later, and inadequate moisture may cause germination problems. Cover crop seeding boxes need to be filled when the grain is dumped and may slow down harvesting.

Some farmers mount a Gandy seeder on a Phoenix harrow, Salford unit or vertical tillage tool to get good seed to soil contact.  The biggest issue is the later planting date and various degrees of soil disturbance leading to soil compaction. Every tillage tool results in a loss of soil organic matter and a layer of soil compaction where the blades meet the soil.  The less tillage and the shallower the tool, the less damage is done to soil organic matter and soil structure.  However, poor seed to soil contact can be an issue with shallow incorporation. Adding liquid manure to broadcast seed helps with both seed germination and cover crop growth.

Drilling cover crops almost always gives the best stands due to good seed to soil contact and seed be planted at the right depth for optimal moisture and seed germination. 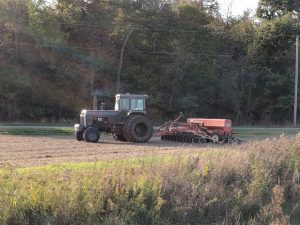 Most cover crops need 60-90 days of growth before winter and cold weather sets in, so timely cover crop planting becomes an issue. Wear and tear on farm equipment may be a problem and it takes more time at harvest to get cover crops planted timely.  Planting earlier maturing corn and soybean varieties allows cover crops to get sown earlier and allows for better growth.

These are the best cover crops to grow this time of year into standing crops.  For grasses; cereal rye, oats, and possibly barley are all shade tolerant.  Avoid winter wheat due to disease issues.  For legumes and clovers; inoculated crimson and Balansa clover or winter peas (only if drilled) work well.  For brassicas; Daikon radish, kale and rape are all small seeded cover crops.  Buckwheat and Phacelia make great pollinators.  Overall, successful cover crop seeding is highly dependent on how the crop is sown and getting good early crop growth.