There are several natural principles that apply to implementing good soil health.  These include minimizing soil disturbance, and maximizing the following: surface cover, live roots, and biological soil diversity.  Adding livestock or grazing also makes soil health flourish.  Learning how to implement these soil health principles may be difficult but there are huge benefits. It is often stated that “Soil health is a journey, not a destination!” so implementing these principles takes time and is never ending.

Minimizing or eliminating soil disturbance is a key first step.  Carbon or soil organic matter (SOM) is the most limiting soil nutrient and excessive disturbance causes carbon to oxidize or burn up in our soil.  It’s like opening the damper on a wood burning stove.  The extra oxygen causes the microbes to burn up the active carbon, the sugars and root exudates that create good soil structure.  Tillage creates soil compaction or poor soil structure.  If you dig in the soil, you can find the layers where you tilled (smeared) throughout the soil.  On conventional tilled farms, a plow layer exists even though the soil has not been plowed for 50 years. Tilling deeper may help temporarily, but just creates a deeper plow pan or plow layer.

Getting carbon back into the soil takes time.  College professors often stated, “You cannot build SOM!” I wished I had asked, “How did it get there in the first place?”  Our original SOM content was 6-8% and it is now closer to 2-3%.  The professors were partially right, you cannot build SOM if you are burning it up with excessive tillage.  It takes live roots and carbon inputs to build SOM.  You can add about .1 to .15 SOM each year with a typical cover crop, or as much as .25 to .5 with a multi-species cover crop after wheat or grazing.  Building and maintain SOM should be every farmer and gardener’s goal, because SOM improves soil structure, holds water, and stores soil nutrients to improve crop productivity.

Keeping the soil surface covered, either with live plants or crop residue is another important soil health principle.

The surface cover slows down rain drop impact and allows water to slowly soak into the soil.  A rain drop can reach velocities of 30 mph and displace soil particles 2 feet high and 4 feet out, creating soil erosion.  Surface residue and plant leaves shade the soil and moderates soil temperatures.  Residue decomposition is based upon adequate soil moisture, good biological life (fungus for lignin and other critters) and temperatures (>50O F). Insecticides, fungicides and harvesting crops late in the season (lower temps) may reduce residue decomposition.  Soil tillage reduces beneficial organisms like fungi that break down the lignin in crop residue. The surface residue acts like insultation and the roof on your house, allowing many beneficial organisms to thrive.  In healthy soils, surface residue degrades quickly. 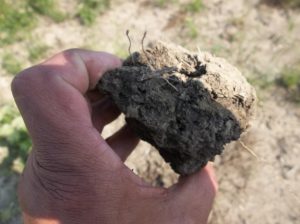 plants.  Grasses have fibrous roots and legumes or clovers have deeper taproots.   Brassica’s and forbs add root and species diversity to reduce weeds, insects and diseases while improving soil structure. Flowering or pollinating cover crops promote insect diversity to keep insects under control.  Biodiversity can also include adding livestock and/or grazing to your system. These major soil health principles are universal and have been applied all over the world to make soils more profitable and productive.