Many lessons can be learned from history, even ancient history.  Scientist have studied dinosaurs and discovered that their foot print was heavier than modern farm equipment.  However, soil compaction from a dinosaur’s  foot print was much less, so scientists are wondering why?  This study was recently published in a recent paper in the Proceedings of the National Academy of Sciences, which linked farm machinery and dinosaurs.

Soil compaction is causing crop yields to decline. The increasing human population requires more food production and more efficient use of arable (crop-producing) land. To increase efficiency, farm machinery has become larger, with combines having wider grain heads and larger grain hoppers and grain carts . Over the last few decades, the weight of combines has increased almost 10-fold, from around 9,000 pounds in 1958 to 80,000 pounds (40 ton) today.

The result has been a growing problem, the compaction of soil below the tillage zone. The subsoil is where plant roots grow, and subsoil and surface compaction has resulted in reduced crop yields. Analyzing a wide range of data, scientists suggest that currently about 20% of the arable land on our planet has lost productivity due to subsoil compaction, and that percentage is growing as mechanization spreads and farm machinery gets bigger.  As that machinery has gotten bigger, so has the size of its tires, to spread the load.

Studies of mammals in general, and of African ungulates (hooved animals) in particular, have shown that animals have done the same thing, increasing the contact area of their feet with increasing weight.  The authors then did the same analyses for sauropods, the long-necked, long-tailed quadrupedal herbivorous dinosaurs popularly known as ‘brontosaurs.’ The largest may have weighed 80 tons — 160,000 pounds. With one foot in motion and the others on the ground while walking, each foot would have been pressing into the ground with over 40,000 pounds or 20 ton per footprint, more than even modern farm machinery tires.

That would certainly have led to subsoil compaction. 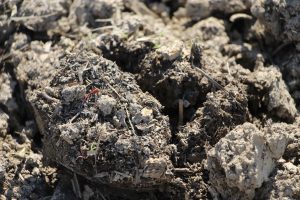 Did that lead to reduced plant productivity? Not judging from the fossil record. Sauropods were one of the most successful groups of dinosaurs, with a couple hundred species known. Their fossil remains have been found on every continent, in rocks from the earliest Jurassic to the end of the Cretaceous, a span of over 140 million years.

Feeding those large bodies, the teeth got a lot of wear and were replaced rapidly. In the iconic American sauropod Diplodocus, each tooth was replaced every 35 days, and in Nigersaurus of Africa, every 14 days. Sauropods didn’t chew their food (despite the Brachiosaurus in the first ‘Jurassic Park’ movie, shown chewing like a cow) but just grabbed and gulped, with the processing going on in their huge guts. Dinosaur guts were fermentation vats, where food was broken down with the help of bacteria. A rough estimate is that animals consume about 3% of their body weight daily.  For a 80,000 pound animal, that is 2,400 pounds of green biomass daily!

All that food resulted in huge amounts of manure, which would have acted like fertilizer. Would that have offset the lowered productivity caused by their immense weight compacting the subsoil? Who knows for sure?  One explanation is that the lack of tillage and extremely high soil organic matter (SOM) levels (6-8%) and high soil biological life created excellent soil structure which can tolerate heavier weights.  The glues and carbon in a soil act like shock absorbers, to allow soils to spring back.  It’s like jumping on an airbag or a large fluffy pillow.

What can we learn from the dinosaurs?  Our current SOM is closer to 1-3% which is only 12-40% of original SOM levels. Tilling soil result in an immediate loss of  soil carbon.  Second, keeping soils bare, with no living plants during the late fall, winter and early spring for 6 months of the year reduces carbon inputs and the glues from live roots needed increase SOM and improve soil structure. The vast majority of soil carbon comes from live roots and root turnover and the soil biological life. Keeping our soils covered with live plants year-round is Mother’s Nature’s way of keeping both soil and nutrients in place for better plant growth.  Fall cover crops can fill that gap and reduce farm costs while improving soils over time. With high fuel prices and about a 50% cost increase for steel for tillage equipment, maybe it’s time to think about alternative ways of farming.  Taken partially from an article in the Columbus Dispatch by Dale Gnidovec, curator of the Orton Geological Museum at Ohio State University.