Effective control of soybean seed and seedling rots is becoming increasingly important in order to protect the value of seed. It is currently the largest single expense in soybean production.

Fusarium root rot, Rhizoctonia seedling blight, Phytophthora root rot, and Pythium damping off are examples of widespread seedling diseases of increasing concern. We now know there are many species of each of these organisms that can affect stand establishment, weaken seedlings, and reduce yield.  Some pathogens, such as the root rot pathogen, Fusarium graminearum, and various Pythium species, can infect both corn and soybean. These organisms are becoming more prevalent in corn-soybean rotations.

With checkoff funding provided by the North Central Soybean Research Program and the United Soybean Board, an interdisciplinary team of plant pathologists and plant breeders have worked together to address the production constraints caused by seedling diseases.

A diagnostic assay to determine the presence of Phytophthora in soil and plant roots has been developed and is in the final stages of testing before commercialization. Plant clinic diagnosticians have already been trained with kits that can be used in the field with relatively simple equipment, with detection and identification being achieved in a matter of minutes.

The ability to accurately identify more key seedling pathogens is right around the corner. Diagnostic assays for the fast identification and accurate quantification of Fusarium species and Rhizoctonia species from soil, roots and soybean stem are in final stages of development.

An additional project supported by checkoff funding provided by the United Soybean Board and NCSRP has resulted in numerous sources of resistance to Phytophthora sojae, Pythium spp. and Fusarium graminearumidentified by screening theentire USDA plant introduction (PI) germplasm collection.  Plant breeders now have a wealth of germplasm material to work with.

Each year, the multi-state team reviews the efficacy of seed treatment fungicides by field-testing the materials over multiple years and locations. The results are published and updated each year in the publication Fungicide Efficacy for Control of Soybean Seedling Diseases (NCERA-137, last  updated February 2019). Ratings summarized from national fungicide trials published in Plant Disease Management Reports by the American Phytopathological Society (aps.org) are also included. 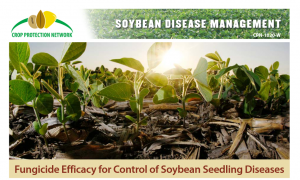 To keep in front of potential resistance to the fungicides, a fast, automated fungicide sensitivity assay has been developed and shared with a number of labs.  The fungicide assay has enabled improved monitoring for fungicide resistance among oomycetes (particularly the common seedling pathogens Pythium and Phytophthora), which will ensure that the seed treatments in use are effective.

In order to monitor and preserve the efficacy of seed treatment fungicides, we need to know the baseline sensitivity of common seedling pathogens to the active ingredients. Species of Fusarium and Pythium that are not sensitive to major seed treatment fungicides have already been detected. The baseline sensitivity of Rhizoctonia solani to fungicide active ingredients is now established, so that fungicide resistance can be monitored.