Understanding the difference between soybean cyst nematode-resistant varieties may help soybean growers understand the importance of rotating sources of resistance, which is one of the “active SCN management” strategies advised by The SCN Coalition. For combating SCN during the 2022 growing season, The SCN Coalition encourages growers to work with their advisors to select the appropriate SCN-resistant varieties.

“Most soybean growers are familiar with PI 88788 and Peking, the two most widely used sources of resistance to soybean cyst nematode,” says Melissa Mitchum, University of Georgia molecular nematologist. “What might be news to growers is these different sources of SCN resistance have different resistance genes — also known as different modes of action.”

Simply speaking, resistance from the PI 88788 line contains one gene, Rhg1. Resistance from Peking contains two resistance genes, Rhg1 and Rhg4. “There are also different flavors — aka alleles — of the Rhg1 genes, which is where the A and B designations come into play,” Mitchum adds. “PI 88788 has Rhg1b, and Peking has Rhg1a plus Rhg4. With Peking you need both genes to confer resistance.”

There’s another wrinkle when it comes to resistance genes: the number of times that gene is repeated in an SCN resistant soybean variety. “Not only do you have different alleles at Rhg1, but there are also differences in the copy number of the genes,” Mitchum explains. 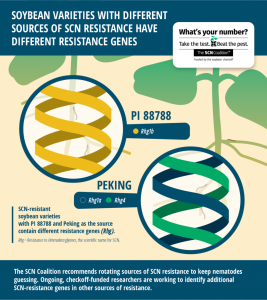 While copy numbers are part of the equation, Mitchum says, “It’s also how the genes interact. For example, we’ve shown that Rhg4 from Peking doesn’t function on its own. Rhg4 also doesn’t talk to Rhg1b from PI 88788. Combining them doesn’t do anything,” says Mitchum. “But pyramiding two resistance genes from wild soybean (Glycine soja) onto Rhg1b does have an effect on combating virulent nematodes. Virulence is the ability of SCN to reproduce on a resistant soybean plant. “Ideally, we’d like growers to rotate among several different modes of action of SCN resistance,” she adds. “That’s what we’re working to provide.”

More resistance genes on the way

However, Mitchum says there are additional resistance genes that haven’t been used yet in commercial soybean varieties. “We’ve only utilized Rhg1 and Rhg4, and that’s what you see in growers’ fields, but we can breed with other sources to introduce other resistance genes.”

Mitchum is working closely with soybean breeders to investigate other sources of resistance. “We’ve already found new genes and gene combinations that are different from Rhg1b in PI 88788 and the Rhg1a/Rhg4 combination in Peking to help fight back against virulent SCN.”

What growers can expect next from checkoff-funded SCN research

For several years, checkoff-funded researchers have been working to identify novel types of nematode resistance. Advances in technology, such as the ability to clone resistance genes and the development of precise molecular markers, have allowed university soybean breeders to speed up the process of getting resistant cultivars out to commercial breeders.

The goal is to get more SCN-resistant modes of action on the market for farmers and protect existing SCN resistance sources. “We want to keep PI 88788 in the toolbox and offer growers other options to protect their soybean yields,” Mitchum says.

To learn more about the checkoff-funded research that’s focused on bringing new tools to soybean growers in the fight against parasitic nematodes, watch the Research Collection of “Let’s Talk Todes” videos.