When late spring and early summer weather gets hot and muggy and we get lots of rain, expect things to grow.  Unfortunately, that is also a good recipe for increased harmful algal blooms (HABs) in Lake Erie.  New research shows that merely reducing phosphorus (P) loadings in Lake Erie will not solve the HAB problem; but may in fact, make them worse! Algal biomasses (actually cyanobacteria) will be reduced, but microcystin or toxic algal production will increase. With reduced P, the algae will take up increased amounts of fixed nitrogen, and in the absence of P will actually produce increased, toxic amounts of algal toxins, the microcysts. The lake won’t be so green and will let in more light, but will become much more toxic (Hellweger et al, Science, 2022)

Phosphorus is usually blamed for most HAB in freshwater because it is the most limiting element needed for plant growth.  However, just a little extra P, greatly increases plant growth, especially in lakes.  However, as far as pollutants, nitrogen especially nitrates are 10X higher in freshwater, especially Lake Erie. Nitrogen is soluble and flows with water, especially after heavy rains.  In 2016,  46 thousand tons of N flowed into Lake Erie which was an average of 83 pounds N lost per acre (Watters, 2016).  In saltwater oceans, N is usually the most limiting element for growth. Excess N from the Mississippi River creates hypoxia or excess plant growth which leads to a loss of oxygen and dead zones in the Gulf of Mexico.  With high fertilizer prices, farmers have huge incentive to reduce both N and P fertilizer losses. Management practices that keep both N & P in the soil and out of surface water are going to be needed to keep our water safe.

When we think about biology, though, it’s not just N & P.  Plants use N to make protein.  Plants use P to make DNA, for energy production, and for cell walls. Although used in much smaller amounts, micronutrients are also needed to make enzymes to speed up metabolic growth.  Fulvic acid increases plant growth 100X on the land but also in the water.  Fulvic acid is a natural carbon compound that enhances the absorption of micronutrients.  Unfortunately, fulvic acid, which is a yellow to brownish color, also is highly soluble,  and flows with the water, just like N and P (in the form of dissolved reactive phosphorus). After a rain, just look at our ditches when they run full of dirty yellow brown water.  That’s both N, P, fulvic acid, and sediment full of micronutrients which allows the HABs to grow. 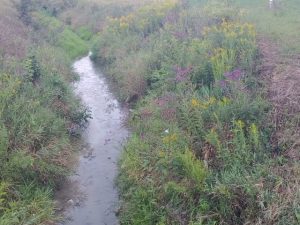 Lake Erie Scientist so far are predicting HABs to be about a 3 on a scale of 1-10 (10 being high Lake Erie HAB).  Warm calm waters produce the most HAB in Lake Erie.  However, it first starts in our streams and rivers and then moves the HAB into Lake Erie. The Maumee, Detroit, and Sandusky rivers are three of the biggest sources of excess nutrients.   Heavy summer rains, very warm temperatures, and calm water with little wind, allows HAB’s to grow quickly.  If P suddenly becomes limiting like it did in 2014 and with excess N, the mycotoxins thrive.

Farmers have several ways to improve N and P management to keep nutrients on the land.  Applying nutrients in several low doses reduces N losses.  Applying N with starter, then side dressing some N, and even adding a little with Y drops later in the growing season, optimizes N plant usage. With N fertilizer costs so high, cutting back on N slightly makes good economic sense and is also good for the environment.  Increased plant growth is dependent on a balance of nutrients.  Cutting back slightly on N and fertilizing with sulfur and micronutrients (especially zinc, manganese, copper) can increase yields.

The real key to keeping all nutrients in the soil is to build soil organic matter.  The four soil health principles still apply.  First, minimize tillage and soil disturbance not only saves diesel fuel, it keeps carbon in the soil.  Carbon is still our most limiting soil nutrient. Second, maximize surface residue cover to reduce soil erosion, reduce soil compaction, and increase water infiltration.  Third, plant a cover crop to build soil organic matter from live roots and to keep N, P, and all soil nutrients recycling. Fourth, increase biodiversity by rotating crops (add wheat to the rotation), add a variety of cover crop species with different root types, and add livestock if possible.  All these soil health practices improve nutrient efficiency for better plant growth, but these are also economical and good for the environment.