Information on preharvest herbicide treatments for soybeans can be found in the “Weed Control Guide for Ohio, Indiana, and Illinois”, at the end of these crop sections (pages 72 and 143 of the 2020 edition).

Some dicamba products are approved for preharvest use in soybeans, and some 2,4-D products are approved for use in corn, and these are not listed in the guide. The basic information for these follows:
Dicamba – soybeans: Apply 8 – 32 oz/A (4 lb/gal products) as a broadcast or spot treatment after soybean pods have reached mature brown color and at least 75% leaf drop has occurred; soybeans may be harvested 14 days or more after a pre-harvest application; do not use preharvest-treated soybean for seed unless a germination test is performed on the seed with an acceptable result of 95% germination or better; do not feed soybean fodder or hay following a preharvest application of this product.
Preharvest herbicide treatments are primarily intended to suppress/kill and dessicate weeds that can make harvest more difficult. Products with contact activity will cause faster dessication and leaf drop of weeds, but may be less effective at killing weeds compared with systemic products. Effective dessication with contact herbicides may still require a wait of a week or more following application, and this can can vary by weed. The maximum paraquat rate is well below the rate required to actually kill large weeds, but it is still probably most effective for dessication of morninglory. 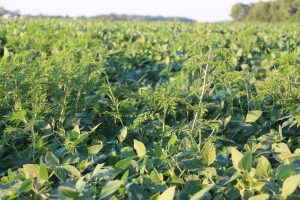 Glyphosate is not likely to be effective on marestail and waterhemp, and many giant ragweed populations, whereas dicamba or 2,4-D may with enough time between application and harvest. The first frost will usually provide results similar to herbicides, so in a situation where crop maturity is delayed or the infested field can be harvested later in fall, consider whether a herbicide treatment is actually needed. Preharvest treatments can also be effective for control of warm season perennials, and the systemic herbicides will be most effective where this is the goal. Keep in mind also that for weeds with fruits that can contaminate harvest, such as black nightshade, the preharvest treatment can dessicate the foliage but will not affect the fruits, except that dessication of weeds may result in fruits closer to the soil.
Preharvest treatments are not intended to be used to speed up crop maturity, and largely do not accomplish this. The restrictions on preharvest treatments that specify how mature the crop must be at time of application are designed to minimize any effect of herbicides on crop maturation. Applying earlier than specified could interfere with that process. The residue tolerances for this use are also based on a certain application timing, and failure to follow label guidelines could result in illegal herbicide residues in grain. For crops being grown for seed, be sure to check with the seed company/processor for approval prior to using any preharvest treatments.