Wheat harvest is underway, and the weeks following wheat harvest provide a great opportunity to establish cover crops. “Planting cover crops after wheat is one of the best and largest windows to establish cover crops with descent growing conditions for a long period of time,” said Dr. Dean Baas, Sustainable Agriculture Educator with Michigan State University Extension. “That period after wheat provides one of the best windows to maximize the benefits of cover crops, and species options are much greater. Having the option of planting different species of cover crops gives the ability to accomplish more unique goals.”

When selecting a cover crop, or species mix, the Midwest Cover Crops Council (MCCC) has a decision-making tool to assist farmers in selecting the best species or mix based on the time of year in order to accomplish the goals. This resource can be found at www.mccc.msu.edu. The period from the end of July to the beginning of September allows for most all the available species of cover crops to have a reliable establishment. The time period varies by species. Some will do better if planted earlier, and some will establish better if planted later.

There are various reasons to select a cover crop mixture over a single species. “Your soil will derive more ecosystem services form multiple species,” said Baas. “Planting multiple species of cover crops will increase rotational diversity, and have an opportunity to get more plants and different types of plants in the rotation.”

When selecting species, at least one of the species in the mixture should be selected to establish based on field and growing season conditions. “By selecting one species known to fit in the field and conditions, it may produce more stable performance year to year,” said Baas. “Individual species establishment and performance may vary from year to year.” NRCS may also require a mix for cost share programs.

Usually, single species cover crops will produce just as much biomass as a cover crop mix, and research has shown that mixes of cover crops do not outperform for many of the cover crop goals. “Single species are typically cheaper than a mix,” said Baas. “But by having a mix, there is a greater chance that one of the species will be more likely to establish and survive. It is like an insurance policy. The more coverage you have, the more expensive it is.” 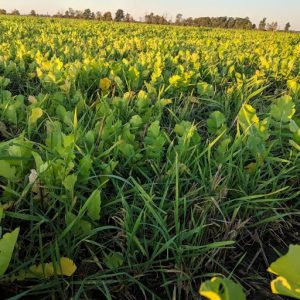 When establishing a cover crop, regardless if it is a single species or cover crop mix, there are four factors to consider. “Temperature and moisture impact seed germination. Moisture is the biggest driver,” said Baas. “The plant type (summer annual, cool season annual, winter annual, etc.) and planting conditions (including seed size and planting depth) need to be considered. When planting a mixture with varying seed size and desired planting depths, there will be a compromise as to the rate and depth the planter is set at.”