Phytophthora sojae survey by the numbers

Since 2016, numbers tell the story. Three states, four years, 128 farms, and 1,280 soil samples. Linda Weber, a graduate student researcher in plant pathology at OARDC has been collecting samples and screening over 400 isolates of Phytophthora sojae against the single resistance genes that are currently available in today’s cultivars. “Researchers evaluate 14 single resistance genes, however there are only about 6 genes that are currently available in cultivars,” Weber said. This survey is funded by money from the Ohio Soybean Check-off through the North Central Soybean Research Program. Weber is evaluating the effectiveness of single resistance genes against the Phytophthora sojae pathogen. 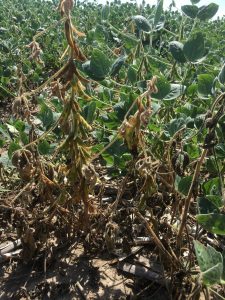 “At this point in the study, some general conclusions can be drawn,” Weber said. “Companies should begin to incorporate other Rps genes in the soybean variety line up.   Since most of the Rps genes are ineffective in this region, farmers should focus on selecting cultivars with high levels of partial resistance. Not every isolate in every field has adapted to the Rps genes, thus, these single resistance genes may still be effective, especially when combined with a high level of partial resistance.” Final results from the survey should be available in early 2020.