Maximizing soybean yield starts with an early planting date and timely rainfall. According to research by Dr. Laura Lindsey, OSU Extension State Soybean and Small Grains Specialist, the best yields in the 2021 variety trials have come from early April planted soybeans that caught timely rains in the R3-R5 growth stage. “According to the USDA NASS data, 7% of soybeans were planted in April this year, which was more than the past several years,” said Lindsey. “We had some trials that we started planting on April 5th, and the soil temperatures and conditions were nearly perfect.”

The growing conditions a soybean plant experiences throughout the season impact the yield. There are key times when rainfall is more critical than others. “The weather was pretty good this summer for soybeans. I know that there were some areas in the state that got dry, but moisture was pretty good in most areas of the state,” said Linsdey. “We had timely plantings this year, and especially some early plantings, followed by timely rainfall, particularly in the R3-R5 growth stages. That really helped.” 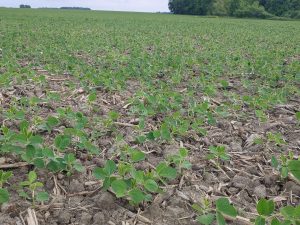 In general Dr. Lindsey still recommends planting soybeans early, as long as the ground fit and soil temperatures are conducive. “Early planting is still important. We learned in our trials when the stand was reduced by a frost and looked really bad, if the population is 50,000 plants per acre or more, then it was best to leave it. Just be sure you have adequate weed control.”

The purpose of the Ohio Soybean Performance Trials is to evaluate soybean varieties for yield and other agronomic characteristics. This evaluation gives soybean producers comparative information for selecting the best varieties for their unique production systems. The entries for each test site were planted in a randomized complete block design. Each entry was replicated four times.

Results can be found here: https://stepupsoy.osu.edu/sites/hcs-soy/files/2021_OSPT_3%20location%20yield.pdf