For corn, the best time to plant traditionally has been May 1-through May 10th according to Ohio State University Research.  Weather delays often make it hard to get all acres planted at this time.  Current varieties have a tremendous ability to compensate and still get good yields, but getting that plant off to a good start is critical.

Regarding soil health, soil microbes process the majority of the nutrients a plant absorbs.  Cold or wet conditions slow microbial growth and hurt plant growth.  Feeding the microbes may be more important than feeding the plant directly!  On no-till corn with a cover crop, 50-75# of actual nitrogen (N) is needed at planting.  Apply no more than 20# N on the seed as pop up due to the salt content which can hurt germination.  The remaining N should be applied in a 2×2 or 4×2 inch away from the plant seed. Conventional corn tends to need less N at planting due to warmer drier soils.

The form of nitrogen applied is important for corn growth.  About 75% of N should be applied in an ammonium starter form with the rest in a nitrate form.  Ammonium is easily converted to nitrates by soil bacteria but can be toxic in high amounts. To combat this problem, many farmers add humic substances to keep the N plant available.  Thiosulfate is added in a 10N to 1S ratio (Nitrogen: Sulfur) due to sulfur deficiency so soil microbes can utilize N efficiently to make amino acids and proteins.   We use to get 20-30#S free from the air, but with the Clean Air act and less soil organic matter, sulfur is often deficient.

The type of nitrogen applied affects both plant growth and yield.  Early on, corn plants need more nitrates for growth and as the plant matures more ammonium for yield.  Nitrates promote the growth hormone auxin while ammonium forms of N promote the cytokinin hormone for yield.  Other growth promoting nutrients are potassium and chlorine while phosphorus and manganese promote yield.  Calcium promotes both growth and yield by stimulating both hormones.  Some farmers now add some calcium to their seed to enhance seed germination.  About 80% of the soil calcium is absorbed by the plant at pollination and calcium is critical for cell wall formation when corn seed and soybeans are being formed.

While glyphosate or Roundup® is a very common herbicide, farmers need to minimize over using this herbicide to kill weeds.  As a major chelator, it ties up many micronutrients especially iron and manganese. 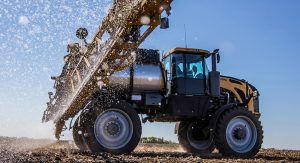 Iron is important for making chlorophyll for photosynthesis to fuel plant growth and yield.  Manganese is commonly plant deficient and while not needed in large amounts, it splits the water molecule to keep plant photosynthesis humming along at high levels. Our soils tend to have adequate supplies of these nutrients; however, they are often chelated or in a form that is not plant available.  Practices that promote good soil health generally make these nutrients plant available.

Earlier this spring the weather tended to be warmer and much drier than normal.  Most farmers terminated their cover crop early to conserve moisture.  Farmers that did not terminate their cover crops have two good options yet and one bad. You can either plant green and terminate the crop later or some farmers terminate right at planting (spray or crimping).  The worst-case scenario is to kill a cover crop several days to one week before planting. Half dead cover crops are a nightmare to plant into because the plant tends to bind, wind, wrap, and hairpin. If it rains, the cover crop can make it difficult to plant. 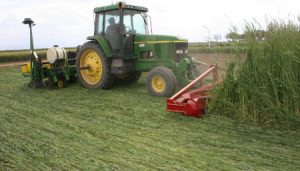 If you crimp a cover crop, always plant in the same direction you roll it to minimize these problems. Planting green has proven to be the easiest and most reliable way to get a good grain crop.  In cereal rye, you can plant when soil conditions are right, crimping later when soybeans are up to 4-5 inches tall and corn up to V4 (4 true leaves).  Farmers in Northwest Ohio will be very busy planting and let’s hope we get everything done right for a great harvest!