Since the 1970’s the number of herbicide resistant weed species, and the sites of action that they have achieved resistance to has increased dramatically. “This is concerning to farmers considering that no new herbicide chemistries have been approved since Liberty (glufosinate) in the early 1990’s, said Mike Hannewald, Field Agronomist for Beck’s. “The amount of money and time it takes to develop a herbicide and then get the proper approval means there will not be anything new introduced in the near future. Farmers need to wisely manage weeds with the tools already available.”

The best way to beat weed pressure is to stop the weeds before they start. “Starting clean is the first step,” said Hannewald. “Burndowns can control weeds such as giant ragweed and marestail that emerge early in the season. If a farmer uses tillage in the spring to control weeds, they need to make sure the weeds are uprooted.”

Keeping records of weed pressure from previous years, and scouting fields early to know what weed challenges can be expected is valuable. “It is important for farmers to know what weeds they have issues with, and then select a pre-emerge herbicide accordingly,” said Hannewald. “Using multiple Sites of Action (SOA) is a key to reducing resistance and getting adequate weed control.” In a Beck’s PFR study, from 2016-2019, evaluating the pre-emerge effectiveness for control of Waterhemp, based on the number of SOA’s used; results showed 60% control using a single SOA, 89% control using 2 SOA’s, and 97% control using 3 SOA’s.

The timeliness of post-emerge herbicide applications is also important. “I recommend that farmers make their post-application based on the calendar, and not by the weeds,” said Hannewald. “The post application should be made 3-4 weeks after the pre-emerge application.

Many times, farmers wait too long to make the post application, and the weeds away from them. The get too large, and the number of growing points to kill makes it more difficult to get acceptable control.”

The use of residual herbicides has been found to be an important factor in a number of research studies. “The use of in-season residual herbicides is the fourth step in managing weeds and reducing resistance,” said Hannewald. “Pre-emerge herbicides will most likely be exhausted for later emerging weeds such as waterhemp. Overlapping residuals, in a layered approach is one strategy for better control. Two Group 15 herbicides layered, or a Group 14 and Group 15 layered, will extend the effective concentration for greater control in a study conducted by the University of Minnesota.”

In a Beck’s PRF three-year study looking at the importance of in-season residuals, it was found that a pre-emerge herbicide application followed by a post-emerge application achieved 88% control, 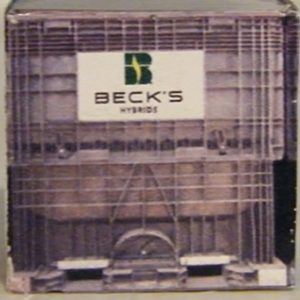