As the summer progresses we are receiving reports of insect problems often encouraged by hot, dry weather.  Previously we reported on spider mites and especially if you are in an area of continued dry weather we recommend scouting your soybeans and corn  https://agcrops.osu.edu/newsletter/corn-newsletter/2020-22/watch-spider-mites-dry-areas .

Some areas are also reporting increases in young grasshoppers in soybeans, another insect favored by dry weather. 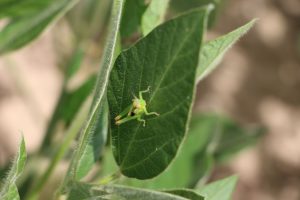 Grasshoppers of often start on field edges so early scouting may allow for an edge treatment.  Japanese beetles are another common defoliator of soybean that are starting to appear.  Both of these pests fall into a general defoliation measurement, and we recommend treatment if defoliation is approaching 20% on the majority of plants in post-flowering beans.  Download our guide to estimating defoliation in soybean at https://aginsects.osu.edu/sites/aginsects/files/imce/Leaf%20Defoliators%20PDF_0.pdf

A weird problem being reported not just in Ohio but in parts of the Midwest as far-flung as Minnesota is the red headed flea beetle, which is being found in corn and soybean.  This is a small, narrow, shiny black beetle with a red head which springs like a flea when disturbed.  Feeding in soybean creates small round holes and in corn longer narrow strips of damage.  This feeding is seldom economic.  In soybean follow the general defoliation threshold of 20%.  Leaf feeding in corn is almost never economic, but be on the watch for silk-clipping, which is rare but possible.  There are no thresholds in corn, but our Minnesota colleague Bruce Potter suggest this guideline: “flea beetles are very numerous (it is likely more than 5-10/plant), pollination is less than 50% complete, and numerous plants have silks clipped to within 1/2 inch, you might consider an insecticide.”

Finally, earlier in the season we reported higher than usual numbers of potato leafhopper in alfalfa and encouraged stepping up scouting.  In some fields third-cut alfalfa is being heavily impacted by this insect.  You can review our scouting advice for this insect at https://agcrops.osu.edu/newsletter/corn-newsletter/2020-17/time-start-scouting-potato-leafhoppers-alfalfa