Ohio is one of the leading states planting Non-GMO crops.  GMO stands for genetically modified organisms.  About 92% of the US corn and 94% of soybeans in 2018 were genetically modified for weeds, insects, or drought tolerance.  Japan and many European countries are demanding crops that are Non-GMO, so farmers can pick up premiums by growing these crops.  Premiums vary by company, crop variety, and purity but premiums may be around $0.25 per corn bushel and $1-$2 per bushel on soybeans. 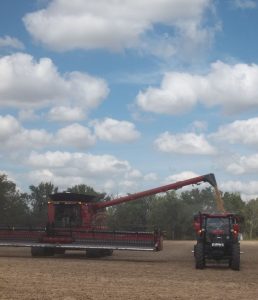 In a GMO crop, scientist identify a gene in a organism, then copy and insert that gene into a crop like corn, soybeans, potatoes, etc.  GMO crops are typically resistant to herbicides like glyphosate (Roundup with CP4 gene) or Glufosinate (Liberty Link, PAT gene).  GMO corn insecticides resistance is obtained by using up to seven genes from the Bacterium thuringiensis that produces proteins that are toxic to certain insect pests like corn rootworm, corn stalk borer, corn earworms, fall army worm and several other insect pests.  Common selling points of GMO corn is that it has less weed and insect pests.   Cons are that it contributes to weed resistance if those herbicides are over used and people eating those crops may have allergy concerns and possible future antibiotic resistance (not proven yet).

I am definitely neutral on the science about GMO versus Non-GMO technology.  As a Type I diabetic, I take Humulin insulin created from human cells inserted into bacteria which I use on a daily basis to survive. Diabetics can use beef and cattle insulin but I prefer human insulin (even if it comes from a bacteria)! GMO crops are also being modified in Africa to have higher nutritional value like 6X higher Vitamin C, 2X higher foliate, and 169X beta- carotene.

On the other hand, GMO crop seed is expensive to plant and with weed resistance, allergies, and possible antibiotic resistance; there just may not be a right or wrong answer.

Many large conventional farmers find it easier to plant GMO crops.  It helps with many weeds and insect problems and makes management generally easier.  However, many farmers are raising Non-GMO crops, especially if they have glyphosate resistance weeds and if they are striving to get higher premiums.  Soil health and organic farmers also like non-GMO crops because they want to work with nature to control pests naturally. Here are general guidelines for raising Non-GMO crops.

A key component is to avoid contaminated seed or pollen from GMO crops planted nearby.  Most Non-GMO farmers plant earlier maturing corn and soybeans to try to avoid pollen contamination.  Also, some farmers may plant both GMO and Non-GMO crops.  In this case, always plant your Non-GMO crops first and select early maturing varieties.  That way you minimize planter, sprayer, and harvester clean out, you should have less pollen contamination, and since the Non-GMO crops should mature faster, they are the first crops harvested. If spraying, remember the same rule applies, spray all Non-GMO fields first then GMO fields second, because all equipment (planters, grain tenders, sprayers, trucks, grain carts, harvesters) have to be cleaned out to avoid contamination.  Farmers now have many mobile phone applications that can really help track seed, planting dates and rates, chemical sprays used, and harvesting.  Depending on the company and where the crop will be exported, usually the highest premiums go to the highest purity seed along with certain crop varieties. 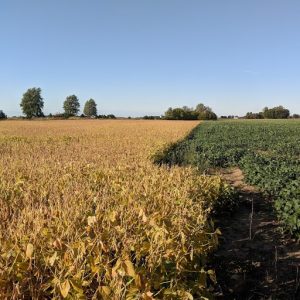 Planting Non-GMO crops requires managing several other considerations.  Watch the prevailing wind direction to avoid pollen contamination from nearby fields. Smaller fields are easier to contaminate than larger fields, so border rows may need to be larger.  Farmers are often advised to plant and harvest the outside Non-GMO crop rows first and then sell that harvested seed as GMO seed.  Most contamination occurs on the outside rows and this process helps clean out equipment. Soybeans are easier to contaminate than corn, because soybeans have less grain volume compared to corn.  Some companies are using a genetic corn pollen blocker (Gat gene) which only allows pollen to be accepted from the host plant.  Other issues include eliminating volunteer plants, minimizing planter errors, and issues caused by flooding (GMO seed sprouting) or drought (which may slow down pollination from the host Non-GMO crop).  Dr. Peter Thomison, OSU retired corn extension specialist has a great fact sheet  “Managing Corn Pollen Drift to avoid contamination of Non-GMO corn.  Spring is a busy time for all farmers trying to get crops planted.  Be Safe!