Sixteen years ago, this month, when Reid Rice was walking across the stage as a graduate from high school in Wauseon, Ohio, he never would have guessed just a decade later, he would be a research scientist and plant breeder for Corteva Agriscience at a location, just a few miles south of their family farm. For the past six years, Rice has been leading soybean research for Corteva (formerly DuPont Pioneer) at their research center just north of Napoleon, Ohio. “The breeding objective at the Napoleon research center is focused on soybeans with a relative maturity of 2.6-3.9 for the target production environment (TPE) found in Ohio, Southeast Michigan, and Northeast Indiana,” said Rice. “We have done a lot of work in the past on agronomic traits, herbicide resistance, and high oils like the Plenish ® soybeans.” 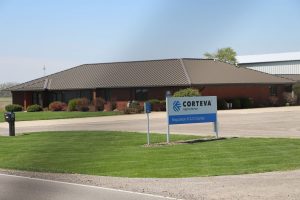 Napoleon has housed a soybean breeding program for 39 years. 1982 was the first year the program had soybean yield trial plots in Ohio. In the last two years the Napoleon Research Center has taken on yield testing for corn and wheat across Ohio as well.

While developing elite varieties that can maximize a farmer’s yield is the first priority, Rice says that an important component of that is the screening for protection from yield robing disease, such as Soybean Cyst Nematode (SCN), Phytophthora sojae, Brown Stem Rot, White Mold, and Sudden Death Syndrome (SDS). “Phytophthora is a focus of our screenings in Napoleon. We will screen over 15,000 unique varieties against P. sojae each year,” said Rice. “In a good breeding program, we need to watch all the traits. We first look at the major molecular genes that provide qualitative traits (such as resistance to P. sojae), and pair those with the best of the quantitative traits. Quantitative traits may have a smaller effect, but when combined, they add to the defensive package of the plant. Finally, we match it with a seed treatment such as Lumisena ® to complete the package.”

Plant breeding is a numbers game and Rice likens it to using a funnel. “We evaluate as many genetics as possible and funnel it down from there. Breeding starts with elite genetic crosses. We start with proven genetics, and cross those with the defensive traits we want to enhance,” said Rice. “We look at the predictions, and then validate those with local testing. Traits such as yield, standability, SDS, and white mold are quantitative and we can measure them in local testing.”

The screening process begins early in the year. Preparations are made starting in January, and the process runs in conjunction with the planting and growing season. “There are literally hundreds of thousands of small field plots across the state. These are planted and evaluated throughout the growing season for things like standability, disease tolerance, canopy width, and much more. These are taken to harvest and advancement decisions are made,” said Rice. “The screening in the greenhouse for P. sojae runs during the same time with preparations starting back in January, and plants are evaluated in the greenhouse from May through August in an environment favorable to the disease development.”

Local research centers provide tremendous value to soybean growers. “With local, multi-year testing, we can screen for a number of factors. Not every year is going to be the same. Some years have conditions that favor white mold pressure. Other years, like 2019, can be a wet year, or we may have a drought year, or SDS year…every year is unique,” said Rice. “2019 was one of the most challenging years (in terms of weather) that the research center has faced according to some of the long-time employees. Fortunately, we were able to get enough of the trials in to make advancement decisions. They were just late plantings,” said Rice. “Unlike an area soybean farmer, we are not able to replant. Even if the calendar date and weather cooperated, the practicality and logistics of getting each plot duplicated as it was originally is not physically possible. We only get one opportunity to do it right”

Intensely Managed Product Advancement Characterization Trials (IMPACT) are the last step prior to a soybean being released. These are conducted as on farm trials with cooperators, and also at the research center in Napoleon. “These are our final intensive look at a bean in the field conditions for our TPE prior to the final release,” said Rice.

Rice is excited about the future. Precision Phenotyping is one area worth noting. “The pace of innovation and our implementation of the technology is exciting,” said Rice. “The uses of satellite technology, drone imagery, Lidar Imaging to get a 3-D view of the soybean plant, and being able to measure canopy size, stand counts, and more. All the robotics are tools we can use, but there is still a need for the breeder to manually get out in the field and view the crop for symptoms of disease pressure and other stresses along the way.”

Another reason for Rice’s enthusiasm is the germplasm pool. “There has been a buildup of elite genetics over the years. We are combining those with specific traits, such as herbicide tolerance. We have been building elite genetics to develop products such as the Enlist E3™ soybeans,” said Rice. “The goal is to have the right product, with the right trait, on the right acre. We are developing the best of the best.”

Being a soybean breeder has its share of challenges. “Like any farmer, the weather is always an unknown,” said Rice. “An equally difficult challenge is the reality that as a breeder, we need to be anticipating the needs of the soybean farmer 4-5 years in the future. We look ahead to next year like all soybean growers do, but from the time the initial cross is made, it can take anywhere from 4 to 5, even up to 7 years to bring a bean to market. We are constantly working to anticipate the growers needs and predict things like soybean pathogen evolution, and more.” Increasing SCN resistance is just one example. “We currently have Peking as a resistance that has been effective for a number of years against SCN, but it is only a matter of time as resistance develops and we need to find new sources as we look ahead to 2026 and 2027.”

Another area to watch in soybean trait development is the herbicide resistance. “Over the past few years, we have seen Dicamba resistance and the 2,4-D Enlist beans come to market. These traits have been in development for several years,” said Rice. “As a soybean breeder I am always looking for grower feedback and trying to better understand the needs of the farmer.”

Being a research scientist, focused on soybeans has definite highlights. “My best day is when a grower tells me about their great yields, and I feel like I can share in a little piece of their success,” said Rice. “My goal every day is to help position the grower to succeed. At Corteva Agriscience we focus on genetic gain and delivering elite genetics to the farmer. Our local research presence allows us to evaluate our beans under the same environmental pressures and in the same soils that the farmer has.”