As crop prices increase, generally fertilizer prices increase as well. Farmers who are booking nitrogen (N) for next year are paying at least twice as much. N use efficiency is critical as farmers try to cut back on N usage while attempting to maintain crop yields. Building soil organic matter (SOM) and improving soil health improves N use efficiency. 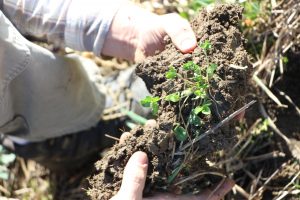 In healthy systems, photosynthesis is maximized which produces large volumes of soil carbon as a food source for the soil biology. The soil biology then recycles those soil nutrients to the plant as plant available nutrients. Keeping soils high in SOM or carbon are a key factor in buffering N and keeping it plant available (Larry Phelan).

Inorganic N fertilizers are usually applied as salts which can be damaging to plants. “Inorganic” means it does not contain a carbon source while organic means the N is attached to carbon. “Salts” are simply positive and negative charges. Nitrate (NO3-) is a negative ion and ammonium (NH4+) is a positive ion. Adding carbon or increasing SOM is a way to buffer salts and reduce plant injury while increasing N use efficiency.

Adding too much inorganic N-based salts to a soil can inhibit a soil’s microbial community. The lower your SOM or soil carbon, the soil has less biological buffering which can then damage both microbial communities and plant growth. In virgin soils or high organic carbon-based soils, this is not a problem. However, sandy soils, soil low in carbon, or in soils that have lost much of their carbon; either salt damage or N use inefficiency becomes a problem. In most of our soils, we still have adequate carbon to buffer the soil, but high N fluctuations and excess N release are what hurts our N use efficiency.

In a conventional system, farmers often put on soluble inorganic N in early spring without much carbon. Without carbon to buffer the salts, huge available N fluctuations initially occur and then N declines during the growing season.

Most crops need their maximum N after pollination, so N use efficiency is rather low. Soluble N can be lost in conventional systems with lower carbon levels through leaching, causing hypoxia in the Gulf of Mexico or Lake Erie.

Healthy soil microbes absorb large amounts of applied nutrients, recycling those nutrients within their cells and then release them over a longer period of time. As soil microbes die off and soil organisms feeding on these microbes, N mineralization occurs, releasing N in a form that is plant available. In healthy soils, there is a more constant supply of N throughout the growing season and more N available when crop needs it after pollination. This improves N use efficiency and is better for the environment.

Not all forms of N are created equal. Plants absorb amino acids, proteins, and microbial metabolites directly from soil microbes in forms that are highly energy efficient. The second most efficient form of N is urea, or amine nitrogen; third is ammonium; with nitrate being the least efficient form of N. When a corn crop absorbs 80% of its N requirement as nitrate, it requires 16% of a plant’s total photosynthetic energy just for nitrate conversion (Marschner) and requires three times more water to convert nitrate to amino acids as compared to ammonium. Applying N in a form the microbes can easily utilize and recycle creates the highest N use efficiency (John Kemp).

Instead of trying to feed the plants directly, feed the microbes first! Microbial forms of N are not leachable and are plant available even when there is less water in the soil profile. Apply N as either liquid 32-0-0, liquid 28-0-0, or liquid urea 21-0-0 (the most efficient liquid N source) and then feed the microbes what they need to rapidly consume the applied N.

A good recipe next spring is to add 3% of the total N solution as humic acid (based on weight or volume). Next add ammonium thiosulfate (ATS) 12-0-0-26S to produce a 10:1 nitrogen to sulfur ratio in the final solution. Next, add a carbohydrate or sugar source like molasses at 3% of the total solution. Finally add molybdenum, needed for the nitrate reductase enzyme to convert N into plant proteins. Efficient N utilization is critical to achieving good yields and higher profits while preserving the environment.