All things working together

To be successful in agriculture today folks need to work together, according to Darke County Farmer Greg McGlinch. Greg and his family operate Down Home Farms near Versailles.

“It started at a young age working with my Dad and Grandpa and Great Uncle, learning some of the old school methods and lessons. A lot of those still apply today,” McGlinch said. “This farm was purchased by my great grandfather in 1900, and for over 121 years we have been learning and sharing.” 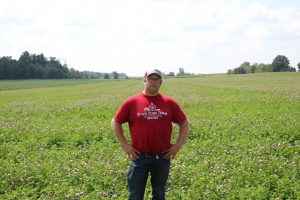 Down Home Farms has diversified their crop production over the years raising corn, soybeans, wheat, oats, barley, cereal rye, red clover, sorghum Sudan, and hops. They also have an orchard and raise pasture poultry. Recently they have expanded in cover crop seed production and seed cleaning.

“We started with cereal rye,” McGlinch said. “We initially planted the rye for a cover crop, and then began to raise it for seed. Then we started working with Indian Creek Distillery in New Carlisle to raise and mill the rye for their whiskey. We are a field-to-finish operation.”

McGlinch is a farmer and also a graduate student at The Ohio State University working with Laura Lindsey on his PhD researching malting barley and agronomic effects on yield and quality.

“After graduating with my undergraduate degree, I taught high school agriculture,” McGlinch said. “When we moved back to Ohio, I worked at Darke County SWCD. It was while at soil and water that I became more involved in researching and understanding water quality and nutrient management. We worked with cover crops and manure application. We learned which cover crops performed the best in different situations, and which ones held the different nutrients from the manure. We worked with farmers to implement practices and design a plan to reduce nutrient load in local streams.”

McGlinch also worked at Wright State University, Lake Campus, and headed-up the development of the agriculture program, and while there he conducted research with Stephen Jacquemin and Theresa Dirksen.

“Dr. Jacquemin and Theresa Dirksen were studying changes in the water quality of Grand Lake St. Marys after the distressed watershed rules were implemented. In one study, we conducted research at VanTilburg Farms on a saturated buffer and measured how it removed nutrients such as nitrogen and phosphorus from the water as it passed through the soil in the buffer system. It was a great partnership,” he said.

When it comes to the different cover crops McGlinch has raised, each one has a specific purpose while all working together.

“I really like cereal rye. Cereal rye is a great overwintering crop that can be seeded late and still have a good stand in the spring. It fits in almost any operation and is a great place to start,” McGlinch said. “Oats is also a good one and can be seeded early fall or early spring. It is somewhat cold hardy in the early winter, but will winter kill when it gets really cold, so you do not need to worry about termination in the spring. It does a lot of good things in the soil.

“We have worked with Daikon radishes. The radish is not meant to be in a monoculture. It performs better with a diverse mix of other species. The different species work together to hold different nutrients. The radish grows aggressive and holds a lot of nutrients. If it is a monocrop, and you get too many and then have a hard freeze followed by a quick warm-up, it will stink, literally. Sorghum Sudan is very good, and especially drought tolerant. It is good as a forage and worms like it too. It does a nice job loosening the soil. It will winter kill, and the worms will break it down over the winter, so it is easy to plant into.”

“We like to experiment with different things and see how they work, and what works with each other,” McGlinch said. “The goal is not only the plant diversity, but also the economics. When someone comes to me and asks about cover crops, I usually ask them what their goals are with the crop, and what they want to achieve and what the economics are behind it. I work with a local seed company and collaborate with a lot of folks to make it all work. It takes people working together to be successful, just like the diverse cover crops in a mix working together to achieve the goals.”